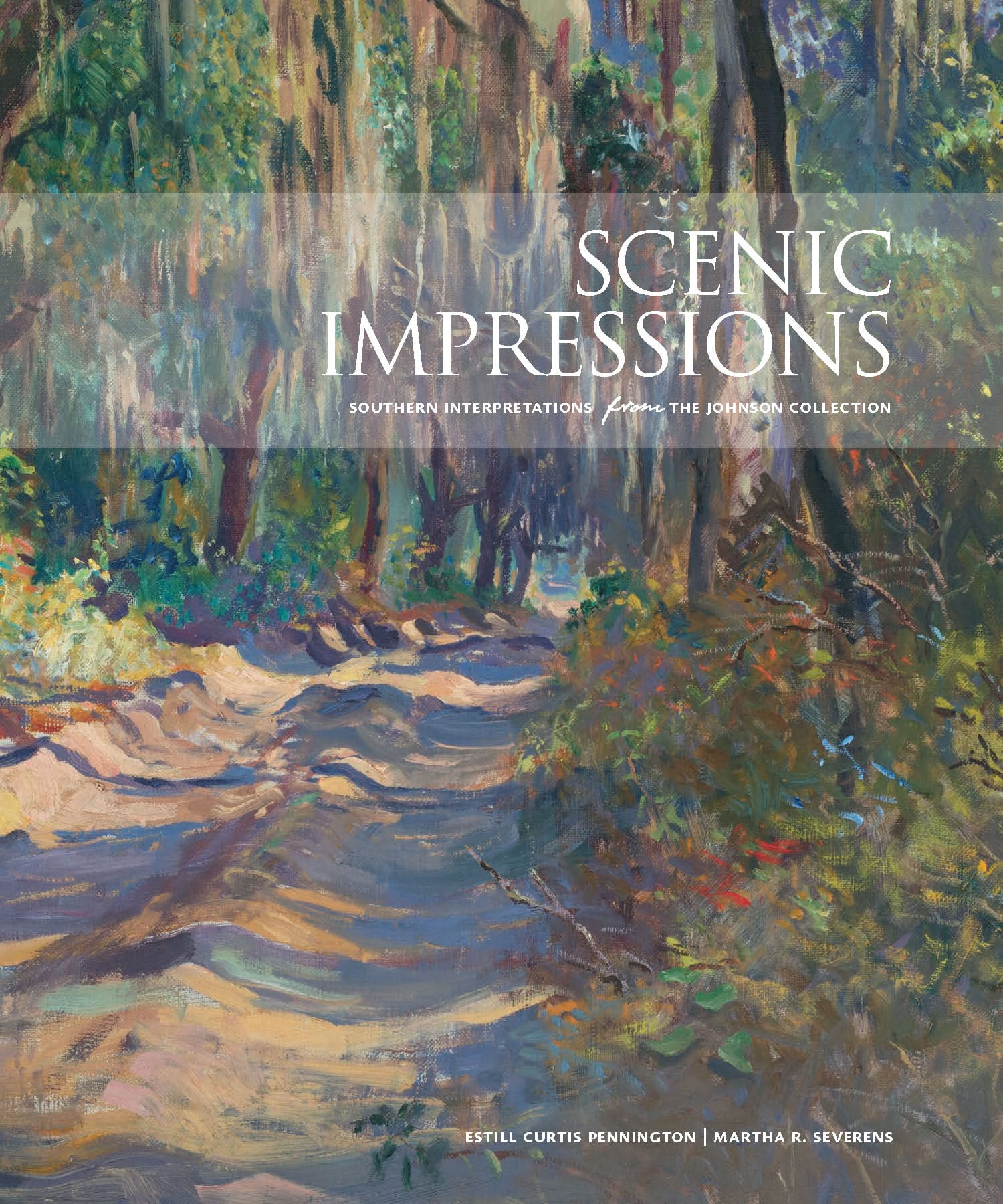 Southern Interpretations from the Johnson Collection

The radical changes wrought by the rise of the salon system in nineteenth-century Europe provoked an interesting response from painters in the American South. Painterly trends emanating from Barbizon and Giverny emphasized the subtle textures of nature through warm color and broken brush stroke. Artists' subject matter tended to represent a prosperous middle class at play, with the subtle suggestion that painting was indeed art for art's sake and not an evocation of the heroic manner. Many painters in the South took up the stylistics of Tonalism, Impressionism, and naturalism to create works of a very evocative nature, works which celebrated the Southern scene as an exotic other, a locale offering refuge from an increasingly mechanized urban environment.

Scenic Impressions offers an insight into a particular period of American art history as borne out in seminal paintings from the holdings of the Johnson Collection of Spartanburg, South Carolina. By consolidating academic information on a disparate group of objects under a common theme and important global artistic umbrella, Scenic Impressions will underscore the Johnsons' commitment to illuminating the rich cultural history of the American South and advancing scholarship in the field, specifically examining some forty paintings created between 1880 and 1940, including landscapes and genre scenes. A foreword, written by Kevin Sharp, director of the Dixon Gallery and Gardens in Memphis, Tennessee, introduces the topic. Two lead essays, written by noted art historians Estill Curtis Pennington and Martha R. Severens, discuss the history and import of the Impressionist movement—abroad and domestically—and specifically address the school's influence on art created in and about the American South. The featured works of art are presented in full color plates and delineated in complementary entries written by Pennington and Severens. Also included are detailed artist biographies illustrated by photographs of the artists, extensive documentation, and indices.


Estill Curtis Pennington has served in curatorial capacities for the Archives of American Art, National Portrait Gallery, New Orleans Museum of Art, and Morris Museum of Art. Pennington's Kentucky: The Master Painters from the Frontier Era to the Great Depression was a nominee for the Smithsonian's Charles C. Eldredge Prize for Distinguished Scholarship in American Art and a winner of the 2009 Publication Award of Merit from the Kentucky Historical Society. His previous collaboration with the Johnson Collection is Romantic Spirits: Nineteenth-Century Paintings of the South from the Johnson Collection.

Martha R. Severens is a graduate of Wells College in Aurora, New York, and holds a master's degree from the Johns Hopkins University in Baltimore, Maryland. An art historian, she has served as curator at the Gibbes Museum of Art in Charleston, South Carolina, the Portland Museum of Art in Maine, and the Greenville (S.C.) County Museum of Art. She has published studies on a variety of Southern artists, including Charles Fraser, Alice Ravenel Huger Smith, William Halsey, and Mary Whyte. In addition she is the author of Andrew Wyeth: America's Painter; Greenville County Museum of Art: The Southern Collection; The Charleston Renaissance, and, most recently, From New York to Nebo: The Artistic Journey of Eugene Thomason.

Located in Spartanburg, South Carolina, The Johnson Collection offers an extensive survey of artistic activity in the American South from the late eighteenth century to the present day.

"This lovingly produced book presents a refreshing and meditative slant on Impressionism in the American South."—(Maine Antique Digest)

"Without a doubt, this handsomely illustrated volume will be of great interest to enthusiasts of southern art and history. . . . Scenic Impressions effectively fills a significant gap in the literature on American Impressionism."—The Journal of Southern History