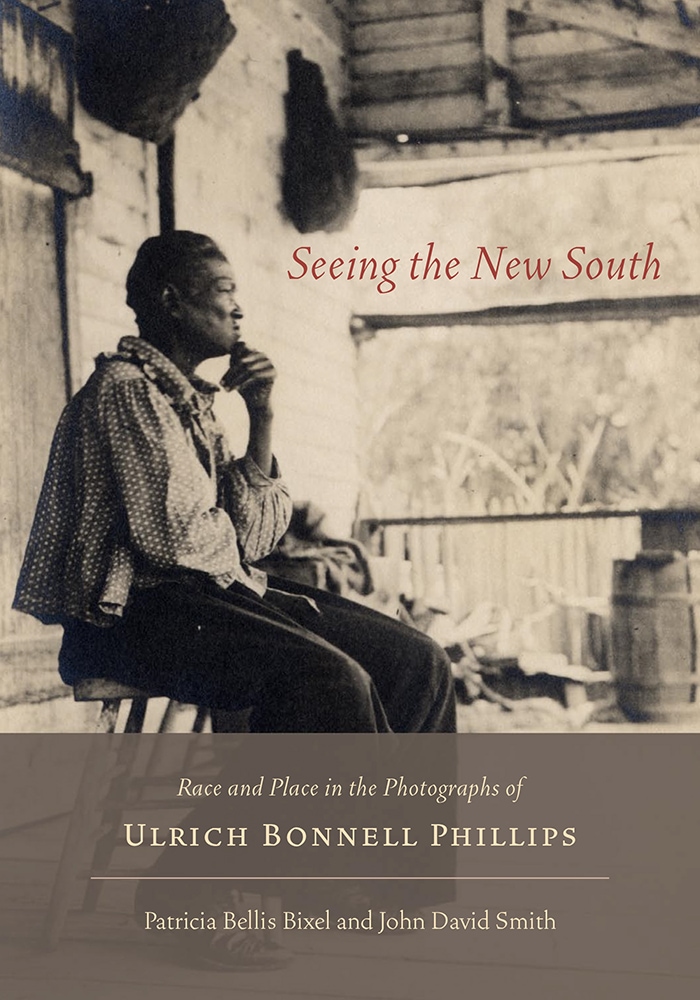 Race and Place in the Photographs of Ulrich Bonnell Phillips

Ulrich Bonnell Phillips (1877-1934) established a reputation as one of the early twentieth century's foremost authorities on the history of African American slavery and the Old South. An empiricist, Phillips approached his subjects analytically and dispassionately, and his scholarship shaped historical investigation of the South for decades. Phillips was an empiricist and based his writing on an array of primary sources, including a growing collection of photographs he accumulated during his research. These images of plantation crops and machinery, agricultural scenes, distinctive architecture, white southerners, and former slaves and their descendants collectively record much about the life and labor in the rural South three decades before the Farm Security Administration undertook its own documentary projects during the New Deal.

In Seeing the New South, photography historian Patricia Bixel and Phillips scholar and historian John David Smith delve into the visual record Phillips left behind, publishing many of these photographs for the first time and integrating his photographic archive with his research and teachings on the history of the South. For example, his Life and Labor in the Old South, published in 1929, was well illustrated with useful photographs. The bulk of Phillips's papers resides in the Sterling Memorial Library at Yale University. The collection includes sixty lantern slides and many photographic prints that Phillips employed in his work. Bixel and Smith uncovered another five hundred images that greatly expanded Phillips's visual archive. Taken between 1904 and 1930, these images provide glimpses of a Southern landscape rarely seen and even more rarely photographed, offering a striking visual account of early-twentieth-century life in the rural South.

Phillips deliberately sought out images of buildings and agricultural scenes emblematic of the South, representative portraits of white and black southerners, and distinctive depictions of farm and town life. Some photographs reinforce Phillips's arguments about the general backwardness of an impoverished rural South and about the limitations of the region's agricultural and industrial economies. But his images also documented active independent black and white communities with diverse economic practices and subcultures. This first-ever collection of Phillips's photographs provides dramatic documentation of economic and social life during an era seldom captured on film, yielding striking visual portraits of human dignity in black and white.


Patricia Bellis Bixel is an associate professor of history and chair of the Department of Arts and Sciences at Maine Maritime Academy in Castine. A former assistant editor for the Journal of Southern History, Bixel is coauthor of Galveston and the 1900 Storm and author of Sailing Ship Elissa.

John David Smith is the Charles H. Stone Distinguished Professor of American History at the University of North Carolina at Charlotte. His previous books include Ulrich Bonnell Phillips: A Southern Historian and His Critics; An Old Creed for the New South: Proslavery Ideology and Historiography, 1865–1918; and Black Judas: William Hannibal Thomas and "The American Negro," winner of the Mayflower Society Award for Nonfiction in 2000.

"Bixel and Smith open many paths to inquiry by revealing and expanding a unique archive, initiating its interpretation, and suggesting rich avenues for continued research related to the historian, the photograph, and the archive."—Journal of Southern History

"U. B. Phillips has long been recognized for his pioneering work in collecting and publishing a wide range of written materials on the Old South. Thanks to the research of Bixel and Smith, we now know that he also collected photographic documentation and used it not only in his classic Life and Labor in the Old South but also in his public lectures. The introduction and chapters here summarize Phillips's broader contribution to historiography and interpret how he made use of photographic evidence. Reprinting eighty-seven of his photographs, the authors show us how to 'read' the images and insightfully discuss the subject matter Phillips was most concerned to picture"—John B. Boles, Rice University

"What a tour de force! Both Bixel and Smith are incisive historiographical students as well as imaginative interpreters of photographs. Together they take the unlikely source of the conservative Ulrich Bonnell Phillips and demonstrate that in his collected photographs there is a useful—indeed at times poignant and sensitive—social notation concerning African Americans, to say nothing of the 'anthropological or sociological' development in his later years of an understanding of black life in different regions of the South. The images as presented in this handsome volume are aesthetically inspiring as well as historically instructive. All hail this fine team of historians and what they have shown us in Seeing the New South."—John Herbert Roper, Sr., Emory & Henry College