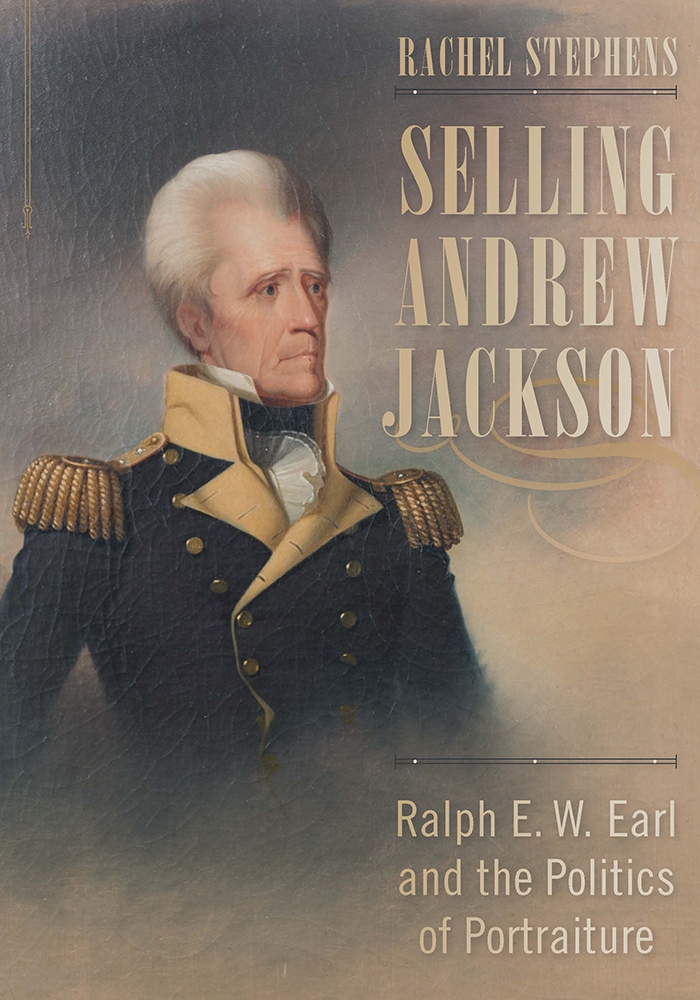 Ralph E. W. Earl and the Politics of Portraiture

Selling Andrew Jackson is the first book-length study of the American portrait painter Ralph E. W. Earl, who worked as Andrew Jackson's personal artist from 1817 until Earl's death in 1838. During this period Jackson held Earl in close council, even providing him residence at the Hermitage, Jackson's home in Tennessee, and at the White House during his presidency. In this well-researched and comprehensive volume, Rachel Stephens examines Earl's role in Jackson's inner circle and the influence of his portraits on Jackson's political career and historical legacy.

By investigating the role that visual culture played in early American history, Stephens reveals the fascinating connections between politics and portraiture in order to challenge existing frameworks for grasping the inner workings of early nineteenth-century politics. Stephens argues that understanding the role Earl played within Jackson's coterie is critical to understanding the trajectory of Jackson's career. Earl, she concludes, should be credited with playing the propagandistic role of image-shaper—long before such a position existed within American presidential politics. Earl's portraits became fine art icons that changed in character and context as Jackson matured from the hero of the Battle of New Orleans to the first common-man president to the leader of the Democratic party, and finally to the rustic sage of the Hermitage.

Jackson and Earl worked as a team to exploit an emerging political culture that sought pictures of famous people to complement the nation's exploding mass culture, grounded on printing, fast communications, and technological innovation. To further this cause, Earl operated a printmaking enterprise and used his portrait images to create engravings and lithographs to spread Jackson's influence into homes and businesses. Portraits became vehicles to portray political allegiances, middle-class cultural aspirations, and the conspicuous trappings of wealth and power.

Through a comprehensive analysis of primary sources including those detailing Jackson's politics, contemporary political cartoons and caricatures, portraits and prints, and the social and economic history of the period, Stephens illuminates the man they pictured in new ways, seeking to broaden the understanding of such a complicated figure in American history.

"An important and much needed contribution to the scholarship of early American art history, Rachel Stephens's well-researched book on the understudied artist Ralph E.W. Earl and his relationship with Andrew Jackson will become the standard text for those interested in this period."—Allison Stagg, Freie Universität Berlin

"Rachel Stephen's outstanding study of Ralph E. W. Earl as artist and image maker surely heralds a new age in the study of painting in the South. While many previous scholars have treated Earl in dismissive, antiquarian terms, Stephens has written an articulate analysis of his artistic heritage and distinct achievement. Surely this work will provide a template for future, much needed studies of painters working outside the stifling confines of the northeast corridor."—Estill Curtis Pennington, author of the forthcoming Matthew Harris Jouett (1788-1827): His Life and Works

"a fascinating examination of antebellum portraiture with a focus on stylistic influences, regional differences, and commercial strategiesStephens's thorough level of research and poignant critique of popular and scholarly misconceptions of Ralph Earl and Southern art history should not only "set the record straight," but become a turning point in the field."—Panorama

"Selling Andrew Jackson provides important insights into Earl's use of portraiture as a political strategy and how he shaped a president's public image for both contemporary audiences and posterity. Earl was the first resident White House artist, the forerunner to official White House photographers. He finally gets the attention he deserves in this book."—H-Net Reviews

"Stephens's book is an essential read for historians of the Jacksonian period to understand the centrality of image-making to the cultural politics of the period."—Winterthur Portfolio