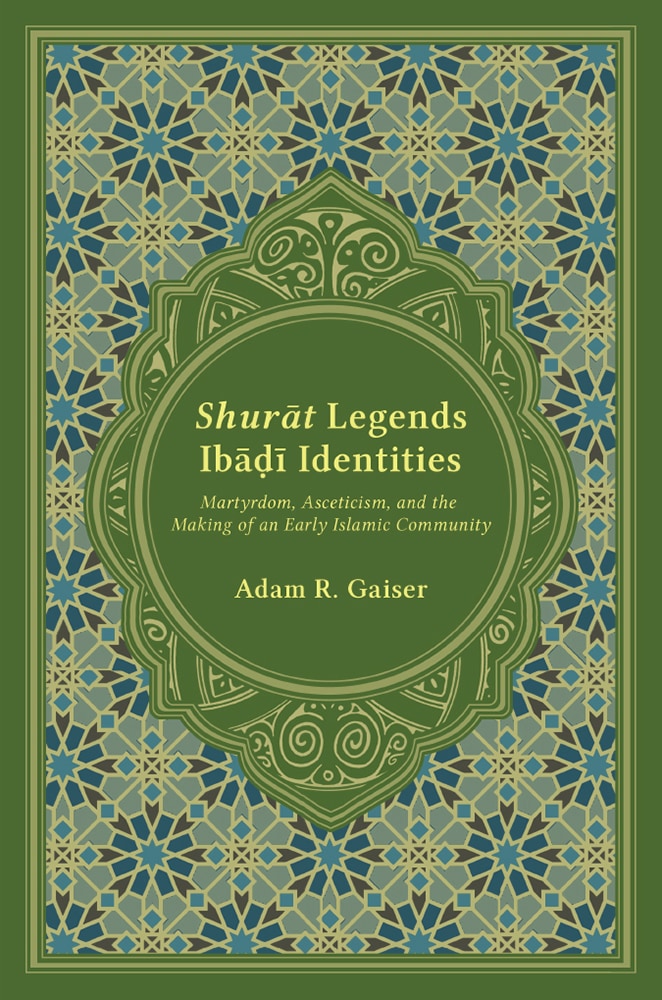 Martyrdom, Asceticism, and the Making of an Early Islamic Community

In Shurat Legends, Ibadi Identities, Adam Gaiser explores the origins and early development of Islamic notions of martyrdom and of martyrdom literature. He examines the catalogs or lists of martyrs (martyrologies) of the early shur?t (Kh?rijites) in the context of late antiquity, showing that shur?t literature, as it can be reconstructed, shares continuity with the martyrologies of earlier Christians and other religious groups, especially in Iraq, and that this powerful literature was transmitted by seventh century shur?t through their successors, the Ib??iyya. Gaiser examines the sources of poems and narratives as quasi-historical accounts and their application in literary creations designed to meet particular communal needs, in particular, the need to establish and shape identity.

Gaiser shows how these accounts accumulated traits—such as all-night prayer vigils, stoic acceptance of death, and miracles—-of a wider ascetic and apocalyptic literature in the eighth century, including martyrdom narratives of Eastern Christianity. By establishing focal points of piety around which a communal identity could be fashioned, such accounts proved suitable for use in missionary activity in North Africa and the Arabian Peninsula. Gaiser also documents the reshaping of these narratives for more quietist purposes: emphasizing moderated rather than violent action, diplomacy, and respect for other Islamic sects as also being monotheistic, rather than condemning them as sinful.

Along with refashioning narratives, Gaiser details the Ib??? efforts to compile collections into genealogies, both biographical dictionaries and lineages of the true faith linking individuals and communities to local saints and martyrs. He also shows how this more nuanced history led to the formation of rules and authorities governing the shur?t. Employing rarely examined manuscript materials to shed light on such processes as identity formation and communal boundary maintenance, Gaiser traces the course by which this martyrdom literature and its potentially dangerous implications came to be institutionalized, contained, and controlled.


Adam R. Gaiser is an associate professor of religion at Florida State University, where he teaches classes on Islamic studies. His research interests include early Islamic sectarianism, the Khārijites, Ibādiyya, and early Shīa. Gaiser is the author of Muslims, Scholars, Soldiers: The Origin and Elaboration of the Ibādī Imāmate Traditions.

"In a nuanced and sophisticated exposition Gaiser shows how Ibāḍīs, the first distinct Muslim sectarian group, engaged in identity construction and boundary maintenance by using narratives of asceticism and martyrdom harking back to the earlier shurāt, who exchanged this world for Paradise, that resonate with similar late antique themes."—Michael Morony, University of California, Los Angeles

"The author of this meticulous study examines the shurāt and Ibāḍī hagiographical narratives in the context of late antiquity and early Islam. He offers a useful corrective to certain strains of scholarship regarding the Khārijites, namely that the Khārijites and their subgroups possessed coherent, distinctive theologies. He discusses the classification and subsequent treatment of non-Ibāḍīs in order to distinguish the emerging Ibāḍiyya from the militant Azraqites and Najdites. Following the early Ibāḍī authors, the author also clarifies Ibāḍī taxonomies of unfaithfulness to sort non-Ibāḍīs into recognizable categories. In addition, he accentuates the importance of viewing Ibāḍī hagiographical depictions of martyrs and saints and their opponents."—Abdulrahman al-Salimi, Sultanate of Oman

"Adam Gaiser has produced an engaging study of the creative process of fashioning early Ibāī communal identity that will hopefully also inspire renewed engagement with Khārijism. He is to be commended for his skill in presenting such a complex subject in a well-structured and accessible fashion. His work will be of interest not just to scholars of Ibāī history and doctrine, but also those working on (Islamic) Late Antiquity and the complex nexus of asceticism and martyrdom in this period."—Islam and Christian-Muslim Relations