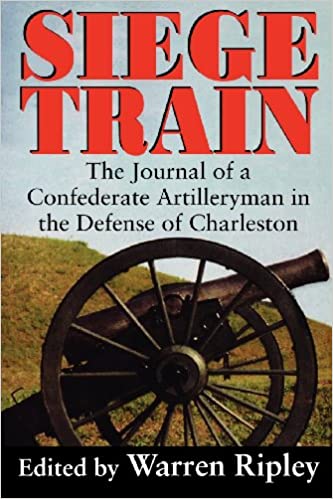 The Journal of a Confederate Artilleryman in Defense of Charleston

A remarkable account of life on the Charleston front

On July 10, 1863, Confederate Major Edward Manigault began a diary which is today one of the most unusual documents to survive the Civil War. Covering 13 months of combat, it is a day-by-day, sometimes hour-by-hour, account of life on the front lines during the Civil War.

Major Manigault was an intelligent, acute observer. His battle scenes are vivid and dramatic. And, although his diary was an official document, by order of General P. G. T. Beauregard, his descriptions of infantry fighting often include amusing personal asides — such as having to choose between saving a valuable saddle or saving his life when his horse was shot out from under him. But most interesting are the major's descriptions of the daily administration and training of his unit under field conditions. Some of his administrative details are available from no other source — he describes the procedures of artillery practice in the field; he gives numerous tables recording the results of combat firing and statistics such as weight of projectiles, charges, ranges and elevations; he describes how certain types of artillery projectiles actually worked, or failed to work, against an enemy.

Major Manigault's journal provides a wealth of information for Civil War scholars. But, surprisingly, the detail detracts very little from the journal's entertainment value for the casual reader. Manigault's diary depicts his unit's participation in such well-known engagements as the battle for Battery Wagner and the attempt to sieze the U.S. gunboat Marblehead. Siege Train is a vivid picture of day-to-day operations as well as the trials of a competent, but uncelebrated, battalion commander trying to accomplish his job under combat conditions.


Warren Ripley, a journalist and writer who lives in Charleston, South Carolina, is author of several books on military history, including Artillery and Ammunition in the Civil War.

"Many published diaries of participants in the War Between the States have appeared over the years, and this is one of the best."—Charleston, SC, News & Courier