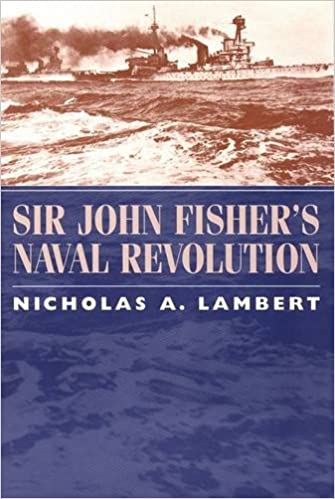 For most of the twentieth century, historians have thought that British naval policy was driven by the Anglo-German arms race. After examining a prodigious quantity of primary sources, Nicholas A. Lambert concludes that Admiralty decision-making was in fact driven by factors unrelated to the German building program. Winner of the Society for Military History's 2000 Distinguished Book Award, Sir John Fisher's Naval Revolution explores the intrigue and negotiations between the Admiralty and leading domestic politicians and social reformers of the day, such as Herbert H. Asquith, David Lloyd George, and Winston Churchill. Lambert also explains how Great Britain's naval leaders responded to these non-military, cultural challenges under the direction of Admiral Sir John Fisher, the service head of the Admiralty from 1904 to 1910, who believed in a radically new approach to naval defense. For mainly political reasons, however, Fisher concealed his "military technological revolution" and worked surreptitiously to create a new model fleet capable of protecting all of Britain's imperial interests across the globe

Nicholas Lambert received his doctorate from Oxford University in 1992. He has held fellowships at Yale University, Wolfson College, Oxford, and Southampton University. He lives in London and Pasadena, California.

"This extraordinary book examines the radical and multi-faceted solution to the problem of British naval defense in the early 20th century devised by Admiral Sir John Fisher. His study is based upon an intensive investigation of archival sources that surpasses all previous work on the Royal Navy in the steam era."—Proceedings

"This excellent book challenges most of the traditional interpretations of British naval policy in the period before the Great War . . . a masterful piece of historical dissection, beautifully structured and written with real elegance . . . this is quite a splendid book and one that it is hard to recommend too highly."—Journal of Military History

"This is a superb, scholarly study . . . Lambert provides a brilliant, incisive insight into the challenges of naval force development in a period of rapid change. . . . The tools of the trade that Lambert uses to construct his analysis are his remarkable—one might even say awesome—research, an interpretive skill that allows him to reconcile divergent threads that previous historians have been unable to knit together, and a competent narrative style."—The American Neptune

"This is a very good book and a very important one. . . . Lambert's command of the primary sources is remarkable. . . . His treatment not only lays bare the superficial nature of much previous historical research in this era but also indicates the degree to which that superficiality has caused our understanding of the period to be profoundly flawed."—Naval War College Review

1999 Norman B. Tomlinson, Jr., Book Prize by the Western Front Association-United States Branch for the best book-length monograph in English on the history of the World War One era
1999 Distinguished Book Award from the Society for Military History