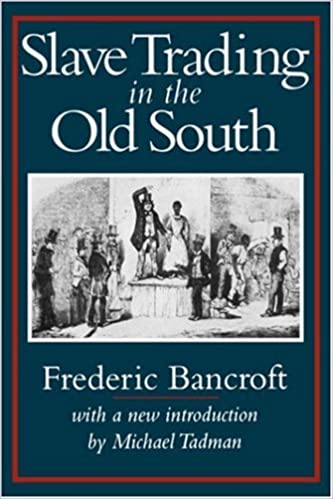 Slave Trading in the Old South

Overwhelming evidence against the whitewashing of the "peculiar institution"

Posting what he called "a most deadly array of facts," Frederic Bancroft exploded deeply entrenched myths about antebellum slavery when Slave Trading in the Old South was first published in 1931. As fresh and informative today as it was then, the classic study returns to print, giving a new generation of historians, students, and history enthusiasts access to Bancroft's pioneering examination of the domestic slave trade.

Drawing largely on research that could not be duplicated today—correspondence with individuals involved in the slave trade and interviews with former slaves—Bancroft exposed the commercial aspects of the enterprise, including the "breeding" and "rearing" of slaves for future sale to western states and territories, the separation of slave families, and the profitability of the practice. By showing that the slave trade so thoroughly dominated the South, Bancroft demonstrated antebellum slavery to be an essentially commercial, exploitative, and cruel industry rather than, as many historians have claimed, a benevolent "peculiar institution" in which the selling of slaves was a relatively rare exchange between neighbors. He also discredited the notion that slave traders were social outcasts, finding instead that they came from even the highest ranks of Southern society.

Michael Tadman's new introduction offers a comprehensive, thoughtful analysis of the evolving historical literature on the subject, reminding readers of the devastating effects the slave trade had both on Southern society as a whole and on its principal victims.


Frederic Bancroft (1860–1945) devoted most of his life to researching slavery in the American South. Born in Illinois, he studied at Amherst College and Columbia University, where he periodically taught lecture courses.

Michael Tadman is a lecturer in the Department of Economic and Social History at the University of Liverpool.