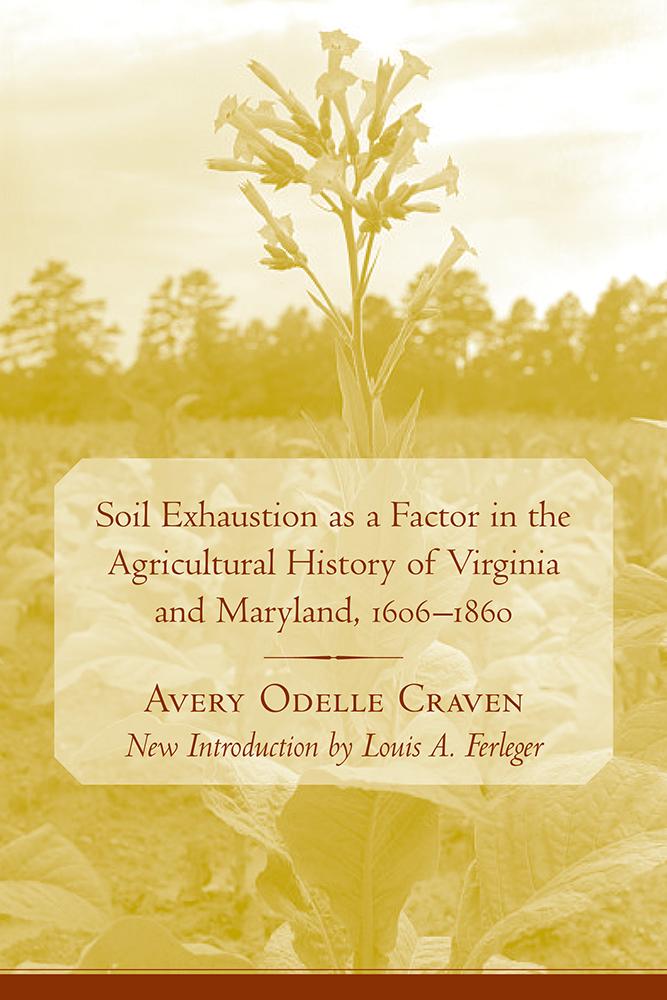 Soil Exhaustion as a Factor in the Agricultural History of Virginia and Maryland, 1606-1860

Recognized since its initial publication in 1926 as a watershed in American historiography, Avery Odelle Craven's study of soil depletion in Virginia and Maryland links elements of Frederick Jackson Turner's frontier thesis, causal aspects of the expansion of slavery, and the economics of staple-crop production into a unified view of southern history from the colonial era to the onset of the Civil War. In this volume Craven initiates a discussion that has changed the way historians view the relationship between historical events and the physical environment.

Using Maryland and Virginia as a case study, Craven assesses the abusive relationship between southern planters and their most valuable and abundant resource—the land—to posit that soil depletion and other ruinous agricultural practices contributed greatly to the economic crisis faced by mid-nineteenth-century America. His study traces a series of poor social and economic choices that affected the land and the survival of those who occupied it. Craven's findings still resonate with students and scholars of frontier, social, economic, agricultural, and environmental history.

In his detailed introduction to the new edition, Louis A. Ferleger sets Craven's first publication in its historical context and offers an appreciation of the historian's life and subsequent contributions to the field of southern history.


Avery Odelle Craven (1885–1980) was a Harvard-trained historian of the American South most noted for his revisionist views that the Civil War was an avoidable conflict. His other germinal books include Edmund Ruffin, Southerner: A Study in Secession; The Coming of the Civil War; The Growth of Southern Nationalism, 1848–1861; and An Historian and the Civil War.

Louis A. Ferleger is a professor of history at Boston University and executive director of the Historical Society. He is coeditor with Robert Paquette of Slavery, Secession, and Southern History.