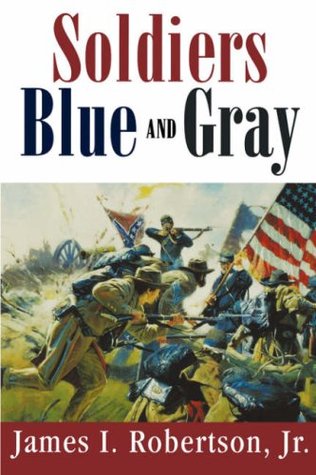 Soldiers Blue and Gray tells the story of Johnny Reb and Billy Yank-soldiers who recorded their experiences and emotions in the largest outpouring of letter writing in America's history. In the first scholarly examination of the Civil War soldier published since Bell I. Wiley's two-volume study half a century ago, James I. Robertson, Jr., draws upon hundreds of rare and obscure sources to produce a moving chronicle of what it was like to participate in the bloodiest and most intense war the world had ever seen.

James I. Robertson, Jr. is the Alumni Distinguished Professor of History at Virginia Polytechnic Institute and State University in Blacksburg. Robertson has received every major award in his field and is the author of more than two hundred articles and ten books on the Civil War period, including Stonewall Jackson: The Man, the Soldier, the Legend; General A. P. Hill: The Story of a Confederate Warrior; Civil War Sites in Virginia; and The Stonewall Brigade.

"This is a master story-teller's book-entertaining, absorbing, filled with anecdotes and humor. Robertson skillfully synthesizes the experiences, attitudes, and perceptions of both Union and Confederate soldiers, using parallel examples to show that soldier life, despite some differences, was basically the same on either side of the battle lines The expert will enjoy reexploring some familiar territory, and the uninitiated will find no better introduction to the subject."—Military History

"It is a remarkable tribute to Robertson's knowledge of the subject that in this, the most complete single volume on Civil War soldiers, he has used hundreds of letters and diaries-quoting soldiers on nearly every subject-without duplicating [Bell I.] Wiley's wonderful accounts."—Journal of Southern History

"Devoting chapters to such topics as enlisting, camp life, religion, and the trial of combat, Robertson constructs an engrossing study of young men at war. His soldiers blue and gray are far more alike than different, sharing a common background, religion, and set of experiences in camp, hospital, and battle."—