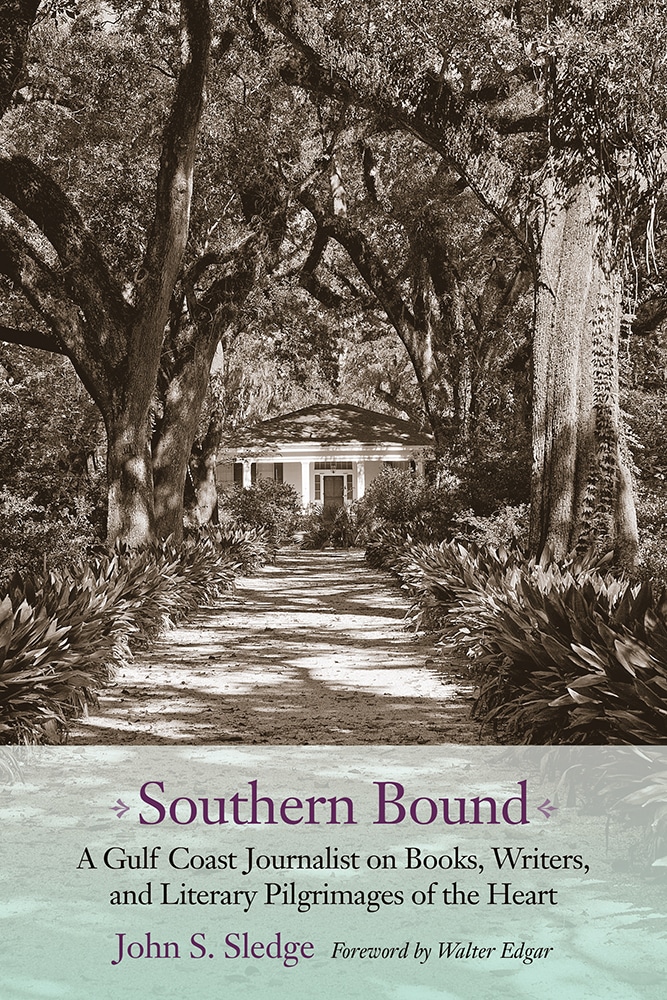 A Gulf Coast Journalist on Books, Writers, and Literary Pilgrimages of the Heart

Southern Bound represents a running conversation on books, writers, and literary travel written for the Mobile Press-Register Books page from 1995 to 2011 by John S. Sledge. The collection includes more than one hundred of the best pieces culled from Sledge's total output of approximately seven hundred columns. Numerous classic authors are celebrated in these pages, including Homer, Plato, Gibbon, Melville, Proust, Conrad, Cather, and Steinbeck as well as modern writers such as Walter Edgar, Tom Franklin, and Eugene Walter.

While some of the essays are relatively straightforward book reviews, others present meditative and deeply personal perspectives on the author's literary experiences such as serving on the jury in the play version To Kill a Mockingbird; spending the night alone in a Jesuit college library's venerable stacks; rambling through funky New Orleans bookshops; talking to Square Books owner Richard Howorth while overlooking the Oxford, Mississippi courthouse; rereading Treasure Island on the shores of Mobile Bay; and remembering a beloved father's favorite books. Engaging and spirited, Southern Bound represents the critical art at its most accessible and will prove entertaining fare for anyone who loves the written word.

John S. Sledge, senior architectural historian for the Mobile Historic Development Commission, was the books editor for the Mobile Press-Register from 1996 to 2012 and is a member of the National Book Critics Circle. He holds a B.A. in history and Spanish from Auburn University and a master's in historic preservation from Middle Tennessee State University. Sledge is the author of three books with photography by Sheila Hagler, Cities of Silence: A Guide to Mobile's Historic Cemeteries, An Ornament to the City: Old Mobile Ironwork, and The Pillared City: Greek Revival Mobile. He and his wife, Lynn, live in Fairhope, Alabama.

"John Sledge loves books, and in Southern Bound that feeling rolls along page after page, reminding us why we love them, too. He takes us through a career of writing about good books and great books, in great writing of his own, from Charles Portis in the great True Grit to the writer across Mobile Bay. But more than that, we see the great value in Sledge and writers like him, writers who take on the closed minds and the book burners. I cannot imagine a world without books, or without people like John Sledge, who help me find and appreciate the best of them, and in them."—Rick Bragg

"John Sledge's wonderful collection of essays is a literary labor of love by a man who loves and understands literature. A treasure to buy and a pleasure to keep for many years to come."—Winston Groom

"Southern Bound is a reader's and writer's delight, John Sledge's collection is a marvel of shrewd book commentary not to be missed. Spanning subjects from Mobile favorites to internationally recognized hotshots, Sledge is incredibly generous, always explaining how a book or author affected him. Because of this singular tone, the whole book has a feeling of freedom and exploration about it. Read!"—Helen Scully

"From the books we deign to cherish, we require several hours' entertainment, an enlightening discourse on subjects heretofore unknown, exposure to a pleasing turn of language, and at the heart of every encounter, unexpected insights on more perplexing mysteries we attempt to fathom every day. Southern Bound meets all these expectations in spades, and belongs in the library of every southern book lover."—Jim Fraiser, Alabama Writers' Forum

"Sledge strikes a fine balance between academic and approachable, while managing to be passionate but not treacle."—B. David Zarley, "The Sun News," May 2013.

"In this never-to-be-forgotten collection, John Sledge takes us on a gratifying joyride through the literary landscape of a rich and fabled region which he has chronicled for years on the southern literary beat. Readers and writers alike will always be indebted to him for such a cherished legacy as this!"—Cassandra King