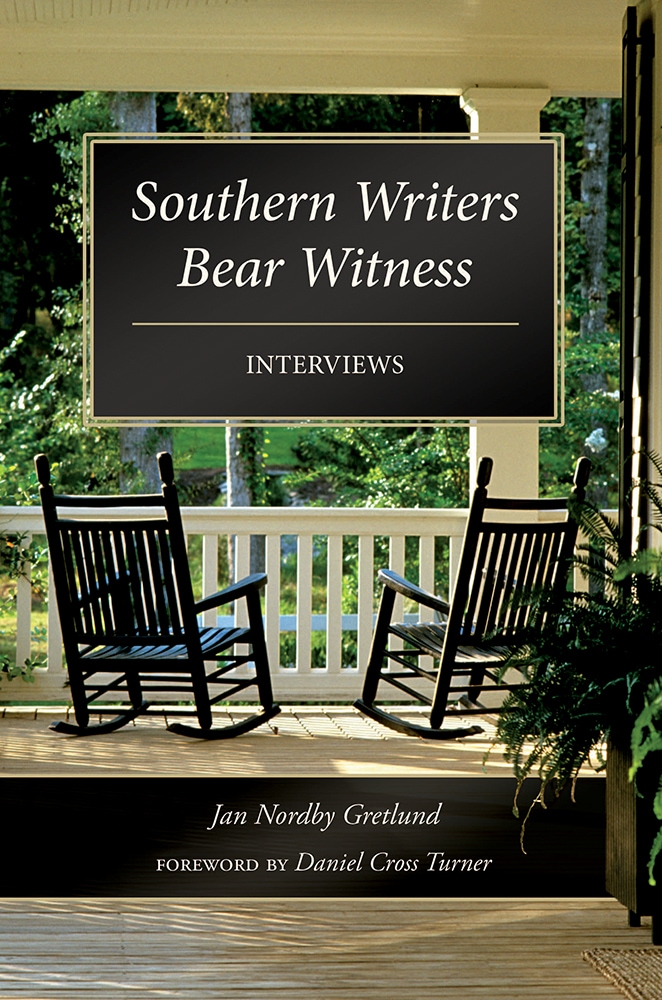 Fourteen Southern storytellers reveal their influences, methods and daily routines, and struggles with the writing process

Jan Nordby Gretlund has been studying the literature of the American South for some fifty years, and his outsider's perspective as a European scholar has made him an intellectually acute witness of both the literature and its creators. Whether it is their language and reflexive storytelling or the craft and techniques by which writers transform life and experience into art that fascinates Gretlund, elements of their fiction led to his interviews with the fourteen storytellers featured in Southern Writers Bear Witness.

Gretlund believes a good interview will always reveal something about a writer's life and character, details that can inform a reading of that writer's fiction. The interviewer's task, according to Gretlund, is to supply the reader with some of the sources and experiences that inspired and shaped the fiction. Through his conversations Gretlund also occasionally elicits the subjects' reflections on other writers and their work to discover affiliations, lines of influence, and divergences, and he also emphasizes the enduring power of their work.

His interviews with Eudora Welty and Pam Durban uncover strong family and community experiences found at the core of their fiction. Gretlund also turns conversations to the craft of writing, writers' daily routines, and specific problems encountered in their work, such as Clyde Edgerton's struggle with point of view. In other exchanges he investigates distinctive elements of a writer's work, such as violence in Barry Hannah's fiction and religious faith in Walker Percy's. Still other conversations, such as his with Josephine Humphreys, touch on the pressures and opportunities of publishing and its influence on the writer's work. Taken together, these authors' insights on life in the South provide a fascinating window into the creative process of storytelling as well as the human experiences that fuel it.

A foreword by Daniel Cross Turner, author of Southern Crossings: Poetry, Memory, and the Transcultural South and co-editor of Undead Souths: The Gothic and Beyond in Southern Literature and Culture and Hard Lines: Rough South Poetry, is also included.


Jan Nordby Gretlund is a senior lecturer at the Center for American Studies at the University of Southern Denmark. He is the author of Eudora Welty's Aesthetics of Place and Frames of Southern Mind: Reflections on the Stoic, Bi-Racial & Existential South. He is the editor of Madison Jones' Garden of Innocence and The Southern State of Mind and the coeditor of Realist of Distances: Flannery O'Connor Revisited, Walker Percy: Novelist and Philosopher, Southern Landscapes, The Late Novels of Eudora Welty, Flannery O'Connor's Radical Reality, and Heads on Fire: Essays on Southern Fiction.

"Time and again, helped by Gretlund's sharp interviewing skills, the writers open up on crucial issues and concerns structuring their art and imaginative visions. It's an immensely insightful and readable collection."—Robert H. Brinkmeyer, Jr., University of South Carolina

"Jan Gretlund has brought together a rich symposium of probing questions and revealing confessions. This is required reading for those who believe that the South continues to thrive and to foster the kind of writing that has made the region famous."—M. Thomas Inge, Randolph-Macon College

"Jan Gretlund has been our watchman in southern studies. These interviews are a testament to a full and significant career—which, I am sure, will not slow down during his retirement."—Michael Kreyling, Gertrude Conaway Vanderbilt Professor of English, emeritus