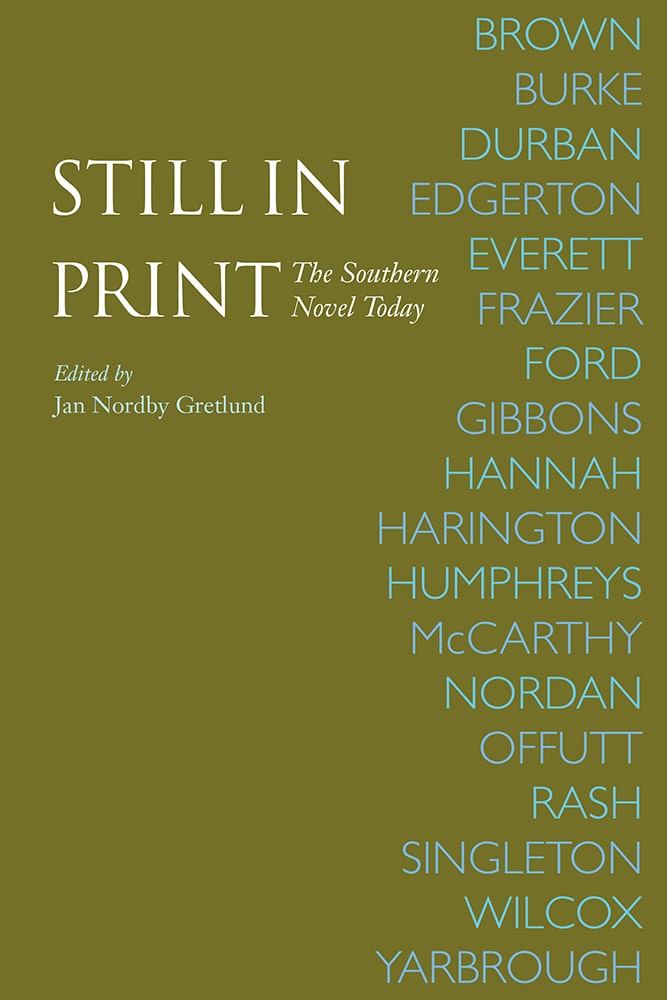 In Still in Print, eighteen southern novels published since 1997 fall under the careful scrutiny of an international cast of accomplished literary critics to identify the very best of recent writings in the genre. These essays highlight the praiseworthy efforts of a pantheon of novelists celebrating and challenging regionality, unearthing manifestations of the past in the present, and looking to the future with wit and healthy skepticism.

Organized around shared themes of history, place, humor, and malaise, the novels discussed here interrogate southern culture and explore the region's promise for the future. Four novels reconsider the Civil War and its aftermath as Charles Frazier, Kaye Gibbons, Josephine Humphreys, and Pam Durban revisit the past and add fresh insights to contemporary discussions of race and gender through their excursions into history. The novels by Steve Yarbrough, Larry Brown, Chris Offutt, Barry Hannah, and James Lee Burke demonstrate a keen sense of place, rooted in a South marked by fundamentalism, poverty, violence, and rampant prejudice but still capable of promise for some unseen future. The comic fiction of George Singleton, Clyde Edgerton, James Wilcox, Donald Harington, and Lewis Nordan shows how southern humor still encompasses customs and speech reflected in concrete places. Ron Rash, Richard Ford, and Cormac McCarthy probe the depths of human existence, often with disturbing results, as they write about protagonists cut off from their own humanity and desperate to reconnect with the human race. Diverse in content but unified in genre, these particular novels have been nominated by the contributors to Still in Print for long-term survival as among the best modern representations of the southern novel.


Jan Nordby Gretlund is the chair of the Center for American Studies at the University of Southern Denmark and the author of Eudora Welty's Aesthetics of Place and Frames of Southern Mind: Reflections on the Stoic, Bi-Racial & Existential South. He is also editor of Madison Jones' Garden of Innocence and The Southern State of Mind and coeditor of Realist of Distances: Flannery O'Connor Revisited; Walker Percy: Novelist and Philosopher; Southern Landscapes; The Late Novels of Eudora Welty; and Flannery O'Connor's Radical Reality.

"Imaginatively conceived and well crafted, Still in Print is essential reading to understand contemporary writers' visions of the American South. Gretlund is a thoughtful and insightful guide to the relationship between earlier southern writers and those engaging the South's new social realities. The volume succeeds fully in its goals of leading readers to key texts and emphasizing the continuing significance of reading southern literature. Teachers of literature and southern studies will be grateful for the sheer usefulness of these essays that provide so much biographical and critical information."—Charles Reagan Wilson, University of Mississippi