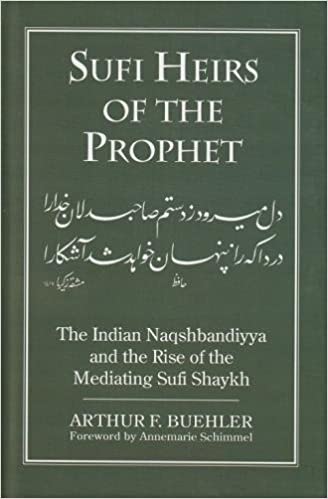 Sufi Heirs of the Prophet

The Indian Naqshbandiyya and the Rise of the Mediating Sufi Shaykh

Sufi Heirs of the Prophet explores the multifaceted development of personal authority in Islamic societies by tracing the transformation of one mystical sufi lineage in colonial India, the Naqshbandiyya. Arthur F. Buehler isolates four sources of personal authority evident in the practices of the Naqshbandiyya—lineage, spiritual traveling, status as a Prophetic exemplar, and the transmission of religious knowledge—to demonstrate how Muslim religious leaders have exercised charismatic leadership through their association with the most compelling of personal Islamic symbols, the Prophet Muhammad. Buehler clarifies the institutional structure of sufism, analyzes overlapping configurations of personal sufi authority, and details how and why revivalist Indian Naqshbandis abandoned spiritual practices that had sustained their predecessors for more than five centuries. He looks specifically at the role of Jama'at 'Ali Shah (d. 1951) to explain current Naqshbandi practices.

Arthur F. Buehler is a senior lecturer in the Department of Religious Studies at Victoria University of Wellington, New Zealand. He is senior editor of the Journal of the History of Sufism.

"It is heartening to see such important questions—on change, and on the complex relationship between authority, colonial society and Sufism in India and Pakistan—raised and engaged in such an insightful and stimulating manner."—Journal of Islamic Studies

"In this well-researched and convincing book, Buehler argues that the Naqshbandi order appropriated a shift in models of personal authority to establish and perpetuate its own institutional structure. Because of its theoretical sophistication and excellent first-hand research, this book should be recommended for both specialists and comparativists."—Religious Studies Review

"This meticulously researched work is not only to be recommended to all those who are particularly concerned with the more recent developments of the Indian Naqshbandiyya but provides some useful pointers for those scholars interested in the analysis of patterns of adaptation."—Bulletin of the School of Oriental and African Studies