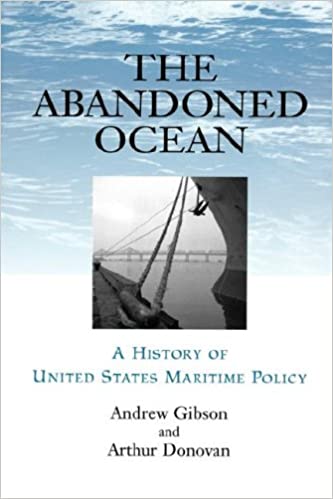 The Abandoned Ocean offers an in-depth appraisal of United States maritime policy from the establishment of a merchant marine immediately after the Revolutionary War through radical industry transformations of the late twentieth century. In this sweeping analysis of federal policies that promote, regulate, protect, and subsidize American shipping in coastal and foreign trade, Andrew Gibson and Arthur Donovan also examine the closely related fortunes of the shipbuilding industry and the intertwined activities of the merchant and military navies. The authors consider why, since the middle of the nineteenth century, United States maritime policy has been so strikingly unsuccessful in achieving its stated goal of promoting a commercially viable merchant marine engaged in foreign trade.

"A splendid book on the assisted suicide of what had once been America's greatest and most interesting industry, that of oceanic shipping."—Frank Uhlig, Jr., editor emeritus, Naval War College Review and author How Navies Fight

"A really important book that should have great appeal to business leaders, government officials, organized labor, lawyers and lobbyists, historians and economists alike. It reads like a novel, but could easily be a textbook . . . It is a universal tale of how government, management and labor subverted and all but destroyed a valuable national asset through misunderstanding of markets and self-dealing."—Carl S. Sloane, Harvard University Graduate School of Business

"Its judgments hit the nail squarely on the head Clearly, rationally, and critically, Gibson and Donovan examine the policies that have failed miserably to insure that the U.S. posseses a merchant fleet of its own."—Choice

"Gibson and Donovan go to great lengths to trace the often-controversial history of US maritime strategies."—Fairplay, the International Shipping Weekly

"The Abandoned Ocean is not a typical 'policy' book; it is written in a lively and compelling style, provides a broad context, and presents a clear analysis. This splendid volume will attract government officials, business historians, maritime historians, and economists"—Gordon Boyce, EH.NET

"A fine new history of American maritime policy. . . A well-written book that provides the most thorough, clear-eyed examination available of why the industry is in the shape it's in. . . Should be read by anyone involved in maritime policy."—Joseph Bonney, JoC Week

"This is an important book that deserves to be read by everyone interested in the hoary question of U.S. maritime policy and, more widely, the survival of protectionism and subsidization in a political economy that pretends to be committed to free trade."—Frank Broeze, Technology and Culture

"Provides the best synthesis yet on the current state of the merchant marine and the history of American policy toward this unique organization. For military historians, this is a useful reference source and should be considered essential for all naval and military historians."—Salvatore R. Mercogliano, Journal of Military History

"This is an essential work for all who hold an interest in maritime matters, both past and future."—American Neptune

"Discussion of U.S. maritime Policy will long be indebted to this formidable work of advocacy. The authors' contention that the era of dependence upon U.S.-flag sealift as an adjunct of geopolitical influence has passed may be tested in the years ahead; it certainly should facilitate further debate."—The Northern Mariner