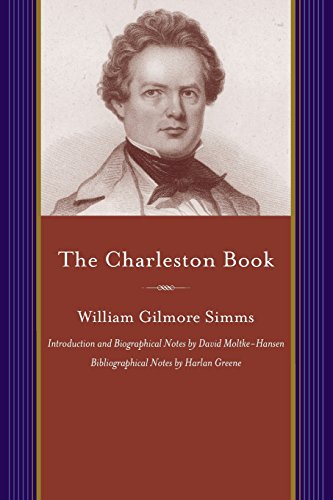 A Miscellany in Prose and Verse

One of the major American cities of the mid-19th century, Charleston was viewed by its citizens as a hub of culture and erudition equal to that of the other great cities of the time, including New York, Boston, Philadelphia, and Baltimore. To illustrate the quality of the city's intellectual life and literary merits, Samuel Hart suggested that Charlestonians should compile an anthology of writings by city residents, much as several other cities had done throughout the late 1830s. Simms, the leading literary figure of Charleston, and one of the nation's most widely-read and celebrated authors, was an easy choice for the project's editor. The book is an important document of the vibrant literary scene of mid-century Charleston, one which reveals much about Simms's understanding of the relationship of his home city and region to the overall intellectual life of the nation.

The Charleston Book: A Miscellany in Prose and Verse contains writings from many members of Simms's social and intellectual circle, including all three Carroll brothers, Charles Fraser, and transplanted New Englanders Samuel and Caroline Gilman, both of whom were widely published authors in their lifetimes. Simms gathered together some of the most important living writers in Charleston. Importantly, Simms did not include any of his own writings inThe Charleston Book , either. Simms, ever balancing his ardent sectional loyalties with his nationalist impulses, seemed to edit this volume with a singular purpose in mind: to show that Charleston not only had been, but continued to be, instrumental in defining the national artistic consciousness and that its talents were not limited to a select few voices.