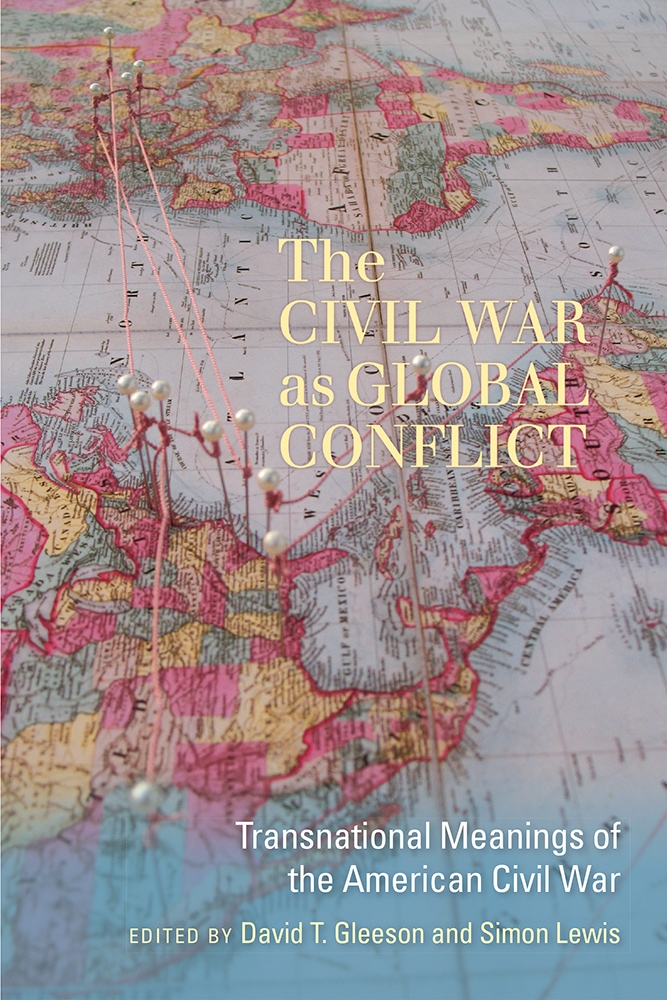 The Civil War as Global Conflict

In an attempt to counter the insular narratives of much of the sesquicentennial commemorations of the Civil War in the United States, editors David T. Gleeson and Simon Lewis present this collection of essays that examine the war as more than a North American conflict, one with transnational concerns. The book, while addressing the origins of the Civil War, places the struggle over slavery and sovereignty in the United States in the context of other conflicts in the Western hemisphere. Additionally Gleeson and Lewis offer an analysis of the impact of the war and its results overseas.

Although the Civil War was the bloodiest conflict in U.S. history and arguably its single most defining event, this work underscores the reality that the war was by no means the only conflict that ensnared the global imperial powers in the mid-nineteenth century. In some ways the Civil War was just another part of contemporary conflicts over the definitions of liberty, democracy, and nationhood.

The editors have successfully linked numerous provocative themes and convergences of time and space to make the work both coherent and cogent. Subjects include such disparate topics as Florence Nightingale, Gone with the Wind, war crimes and racial violence, and choices of allegiance made by immigrants to the United States. While we now take for granted the nation's values of freedom and democracy, we cannot understand the impact of the Civil War and the victorious "new birth of freedom" without thinking globally.

The contributors to The Civil War as Global Conflict reveal that Civil War-era attitudes toward citizenship and democracy were far from fixed or stable. Race, ethnicity, nationhood, and slavery were subjects of fierce controversy. Examining the Civil War in a global context requires us to see the conflict as a seminal event in the continuous struggles of people to achieve liberty and fulfill the potential of human freedom. The book concludes with a coda that reconnects the global with the local and provides ways for Americans to discuss the war and its legacy more productively.


A native of Ireland, David T. Gleeson is a professor of American history at Northumbria University in Newcastle upon Tyne and a former director of the College of Charleston's Carolina Lowcountry and Atlantic World program. He is the editor of The Irish in the Atlantic World and coeditor of Ambiguous Anniversary: The Bicentennial of the International Slave Trade Bans and the author of The Green and the Gray: The Irish in the Confederate States of America.

Simon Lewis is a professor of world literature at the College of Charleston, where he is also an associate director of the Carolina Lowcountry and Atlantic World program. Lewis is the author of White Women Writers and Their African Invention and British and African Literature in Transnational Context and coeditor of Ambiguous Anniversary: The Bicentennial of the International Slave Trade Bans.

"There is little doubt that each of these essays will either revise existing historiographical debates or spawn new areas of inquiry. That is the mark of a fine anthology, and this one succeeds admirably."—H-Net Reviews: H-War

"The writers of this collection effectively balance local and global contexts to produce a significant text that is invaluable to any scholar interested in research desiring to move away from 'pantomime-like North-South, black-white, blue-gray binaries.'"—Jesse Tyler Lobbs, Kansas State University

"The essays in this welcome volume place aspects of the Civil War within a spacious world context. Taking up topics that address economics, diplomacy, ethnicity, politics, gender, race, and memory, they remind us that the greatest military event in American history reverberated far beyond the shores of the United States and the Confederacy."—Gary W. Gallagher, Nau Professor of History, University of Virginia and author of The Union War

"Highly original in conceptualization and execution, this timely volume assembles some of the best new work globalizing the American Civil War. Essays by top scholars revise our understanding of the war, the broader context within which it was fought, and especially its meaning across time and space."—Brian Schoen, associate professor of history and director of Undergraduate Studies, Ohio University

"A collection of well-researched and provocative essays this is a book that merits a careful reading by anyone interested in the Civil War and the internal dimensions of the conflict."—Florida Historical Quarterly

"an interesting starting point for renewed debate over the meaning of the Civil War, not just in American culture, but also in global discussions of equality and citizenship."—Journal of Southern History