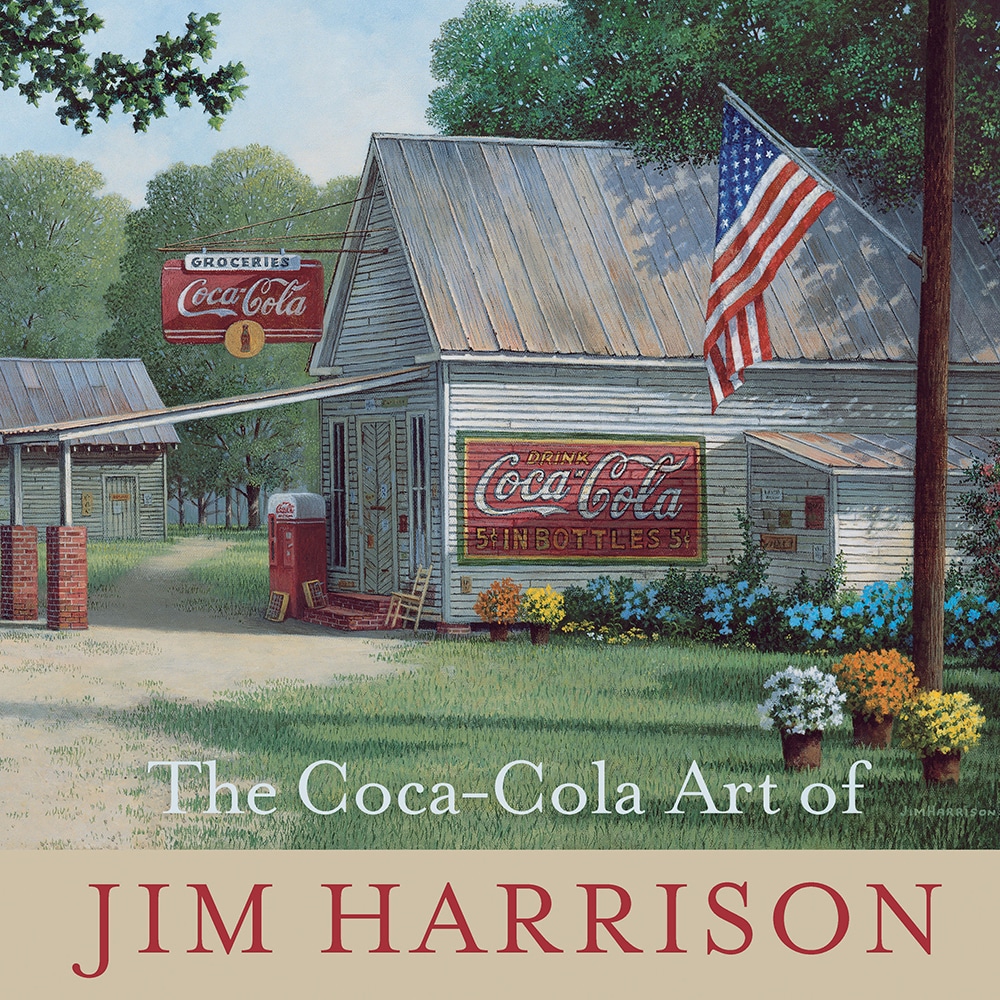 The Coca-Cola Art of Jim Harrison

Coca-Cola is a true American original and one of the world's most recognized and popular American products. In The Coca-Cola Art of Jim Harrison, the artist traces his lifelong love affair with the Coca-Cola trademark that began during his childhood in rural South Carolina.

Harrison enjoyed drinking the sweet and effervescent beverage, but he also was attracted to the Coca-Cola trademark that was blazoned on buildings and signs in his home town. After years of marveling at the work of local sign painter J. J. Cornforth, Harrison approached the seventy-year-old for a summer job. During several summers Cornforth taught Harrison the craft. When the young artist climbed atop the scaffold in the summer of 1952 to paint his first Coca-Cola sign, little did he know that he was launching a career as one of America's foremost landscape artists.

In 1975 Harrison created a painting of a country store that featured a fading Coca-Cola sign he and Cornforth had painted twenty years earlier. The painting, titled "Disappearing America," was offered as one of the first limited-edition Coca-Cola collector prints for $40 by Frame House Gallery. All 1,500 copies sold out quickly, propelling him into the national spotlight through the publisher's network of 600 dealers. Harrison soon became the undisputed leader in rural Americana art, with this and many of his other prints appreciating up to 3,000 percent of their original value.

Since entering into a licensee relationship with the Coca-Cola Company in 1995, Harrison has continued developing limited-edition prints, including his popular annual Coca-Cola calendar. Not surprisingly, Harrison has become an avid collector of old Coca-Cola signs. His studio is lined with a vast array of this collection, which serves as inspiration for new works of art.

Jim Harrison has earned his living as an artist for more than fifty years, and his paintings are featured in museums and corporate art collections across the country including the State Museum of South Carolina, the Morris Museum of Art, the Maytag Corporation, Philip Morris Company, the Leo Burnett Company, and the Augusta National Golf Club. Harrison has been honored with the South Carolina Order of the Palmetto, declared "one of the Palmetto State's Chief Art Treasures" in a resolution by the South Carolina House of Representatives, and bestowed with an honorary doctorate from the University of South Carolina. Harrison is the author or illustrator of several books including Pathways to a Southern Coast and The Palmetto Tree and Its South Carolina Home.

"A beautiful book that managed to throw me back in time to small Southern towns where Coca-Cola was king."—Dew on the Kudzu