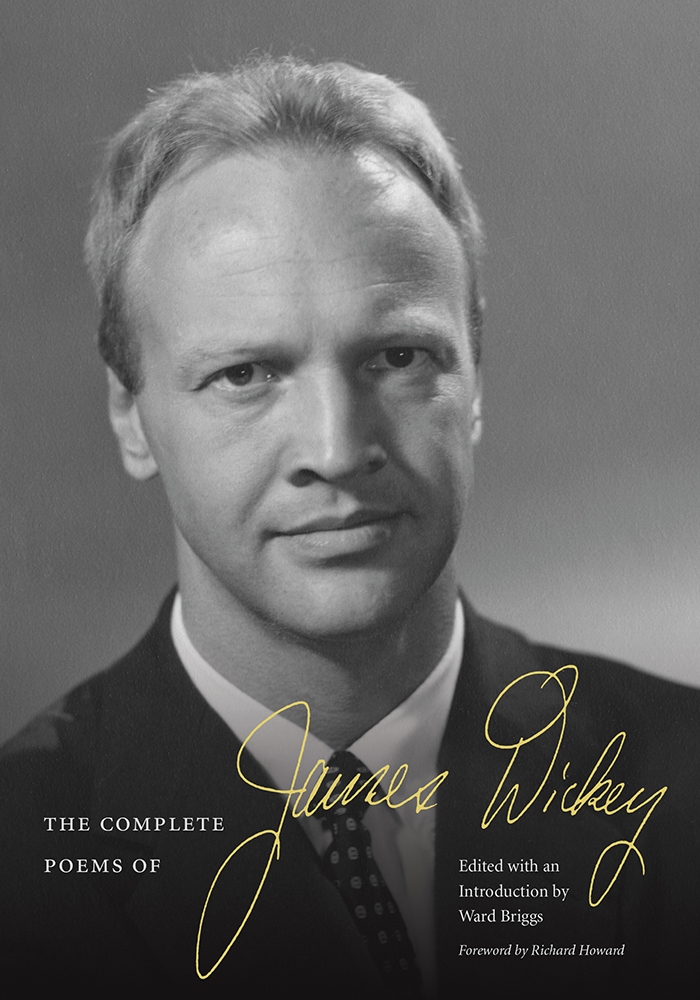 The Complete Poems of James Dickey

The Complete Poems of James Dickey is an authoritative edition of all 331 poems published by one of America's most distinguished poets, collected in one volume for the first time. Dickey's most-admired and most-anthologized poems—such as "The Performance," "Cherrylog Road," "The Firebombing," "Falling," and "May Day Sermon"—along with his epic poem The Zodiac are placed in chronological order of publication, affording a poetic autobiography that reveals the intellectual development and the constant experimentation of an iconic American literary figure.

This collection includes 93 poems Dickey did not publish in The Whole Motion (1992), 238 poems that he collected as an overview of his whole career. The Complete Poems of James Dickey also includes an apparatus listing publication data and textual variants for the poems, as well as explanatory notes placing Dickey's poetry in biographical and historical context. Edited with an introduction by Ward Briggs, this authoritative and complete edition will be the definitive primary source for Dickey's poetry.

This collection includes a foreword by poet Richard Howard, president of the PEN American Center and winner of the Pulitzer Prize for his 1969 collection, Untitled Subjects.


James Dickey (1923–1997) is one of the great American poets of the twentieth century. After working in the advertising industry and teaching at several colleges and universities, Dickey received a National Book Award for Buckdancer's Choice in 1966 and served as poetry consultant to the Library of Congress, a position that later became poet laureate, from 1966 to 1968. He then joined the University of South Carolina English faculty and served as poet in residence until his death. He became a member of the National Institute of Arts and Letters in 1972 and was elected to the American Academy of Arts and Letters in 1987.

Ward Briggs is Carolina Distinguished Professor of Classics Emeritus and Louis Fry Scudder Professor of Humanities Emeritus at the University of South Carolina. He has published widely on the history of American classical scholarship, the career of the classicist Basil Lanneau Gildersleeve, and the classical tradition. He was a friend of James Dickey for more than thirty years.

"James Dickey was like a force of nature—in personality, ambition, and often enough, in achievement. Sometimes the man, in his drive for fame, seemed to get in the way of the poet. Dickey's Complete Poems not only places the best of his great poetry in perspective, it honors the whole of his poetry as an original and demanding work of art. The fifty years of poems represented here demonstrate more than simply a commitment to form and change and growth, they stand as a testament to experiment and discovery. No poet in our history has written with more power per line, more pulse, and more heat of the moment. From the first poem to the last—a marvelous elegy for F. Scott Fitzgerald—the writing is beautifully alive. Dickey pushed the limits. In his great poems he enlarged what American poetry is."—Stanley Plumly

"One must go all the way back to Walt Whitman to find an American poet who can equal the sheer vitality of James Dickey's work. Ward Briggs's majestic compilation solidifies Dickey's position as one of our nation's greatest poets: oracular, unrelenting, and utterly original."—Ron Rash

"As this needed collection reminds us, Dickey's poetry is important not only because it is so skillful, but because it expresses a great deal about the American imagination in its response to an increasingly complex and 'unnatural' phase of civilization. Who can tell us more about our 'American,' 'masculine,' most dangerous selves? Even more than Whitman, Dickey contains multitudes. He cannot be reproached for the fact that some of these aspects of a vast, complex self are at war with the others."—Joyce Carol Oates

"No other American writer since Faulkner has written about landscape, carnality, and war with such music and mythic grandeur."—Adam Tavel, Rain Taxi

"Nevertheless, it is a meticulous and master achievement in both structure and design, and remains a worthwhile investment for any reader seeking a thorough understanding of this great bard's range and ceaseless experimentation."—Adam Tavel, Rain Taxi