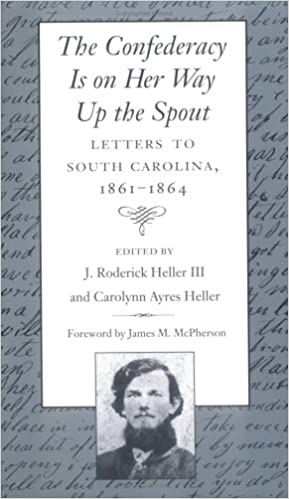 The Confederacy Is on Her Way Up the Spout

"To comprehend the nature of the 'real war,' which Walt Whitman said would 'never get into the books,' we need to get beneath the artificial symmetry of narrative histories, of neat lines and arrows on battle maps, of command decisions and orders from headquarters, to the human dimensions of the conflict. And there is no better place to start than with the letters in this volume." —James M. McPherson, from the foreword

On July 18, 1863, Lawrence Barrett, a private in the Confederate Army, wrote a letter to his brother-in-law in Pickens, South Carolina. "The soldiers has a by word when any body or anything lost saying its gone up the spout I say the Confederacy is on her way up the spout."

These lines are from one of thirty-three letters from seven Confederate soldiers included in this volume and published with their original spelling and punctuation intact. Sent to Lucretia Caroline Barrett McMahan and her husband between 1861 and 1864, the letters were from three of Lucretia's brothers, her brother-in-law, and family friends or acquaintances.


J. Roderick Heller III, a graduate of Princeton University, earned a master's degree in history from Harvard University and a law degree from Harvard Law School. He is the chairman and chief executive officer of NHP, Inc. in Washington, D.C., a former vice chairman of the National Trust for Historic Preservation, and chairman emeritus of the Civil War Trust.

Carolynn Ayres Heller received her bachelor's degree in history from Princeton University and a master's degree in public policy from the John F. Kennedy School of Government at Harvard University. She is now a program officer for the National Democratic Institute for International Affairs in Washington, D.C.

"The Barretts' letters reveal mature soldiers who were sensitive to the fragility of life, dedicated to their nation, and confident of the righteousness of the cause for which they fought."—North Carolina Historical Review