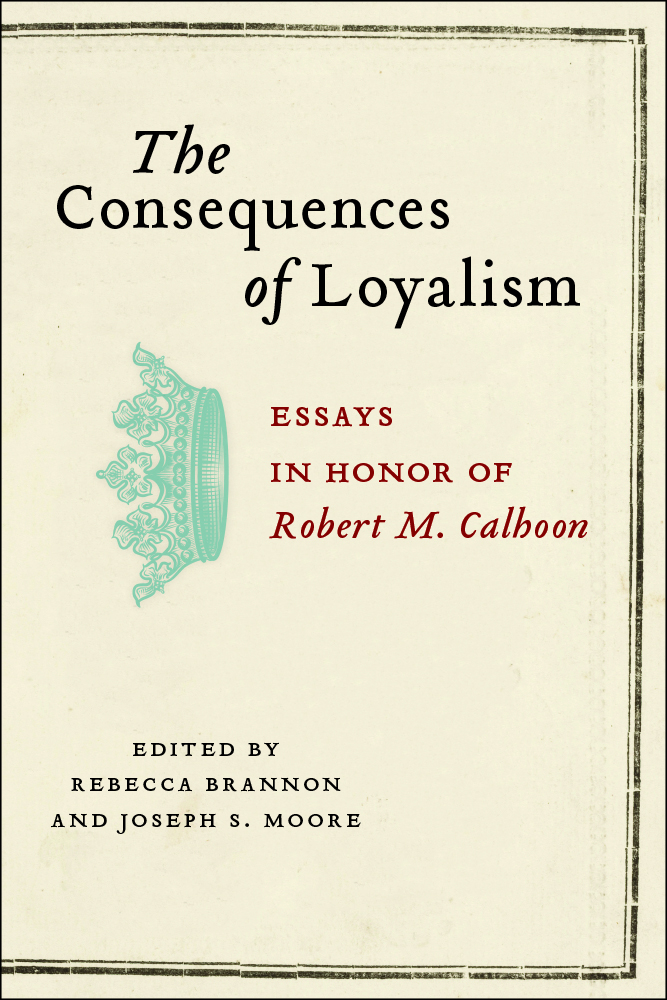 The Consequences of Loyalism

Since the 1970s scholars have regarded Robert M. Calhoon as an invigorating and definitive force when it comes to the study of American Loyalism. His decades-long work redefined the Loyalists' role in the American Revolution from being portrayed as static characters opposing change to being seen eventually as reactionary actors adapting to a society in upheaval. Loyalists were central to the Revolution, and Calhoon and these authors argue that they were not so different in ideology from their Patriot neighbors—except occasionally when they were.

The Consequences of Loyalism, Rebecca Brannon and Joseph S. Moore seek to provide an understanding of Calhoon's foundational influence and the development continuing in the wake of his prolific career. This volume unites sixteen previously unpublished essays that build on Calhoon's work and consider Loyalism's relationship to conflict resolution, imperial bureaucracy, and identity creation. In the first of two sections, established and rising scholars discuss the complexities of Loyalist identity, while considering Calhoon's earlier work. In the second section, scholars work from Calhoon's later publications to investigate Loyalism in terms of the consequences of Loyalism for the Loyalists, and for the legacy of the Revolutionary War.

The Consequences of Loyalism offers a bold, new reinterpretation of Loyalism. This book brings Loyalist dilemmas alive, digging into their personalities and postwar routes. The essays discuss not only Loyalists' experiences during the Revolution, but also their coping and even reintegration in the aftermath. Loyalists from all facets of society fought for what they considered their home country: women wrote letters, commanders took to the battlefield, and thinkers shaped the political conversation. This volume complements Calhoon's influential work, expands the scope of Loyalist studies, and opens the field to a deeper, perhaps revolutionary understanding of the king's men.

Joseph S. Moore is an associate professor of history, department chair, and special assistant to the president at Gardner-Webb University. He is the author of Founding Sins: How a Group of Antislavery Radicals Fought to Put Christ into the Constitution. Moore's work has appeared in Slavery & Abolition, the New York Times, and a range of journals and newspapers.

"Brannon and Moore's commemorative collection of essays fills a historiographical gap and presents scholars with refreshing insight on the diverse demographics, unique experiences, unfortunate consequences, and post-war roles of political moderates along the eastern seaboarda useful addition to the bookshelves of historians at all levels."—Journal of the American Revolution

"These deeply researched and well-written essays are a fitting tribute to Robert M. Calhoun, one the greatest scholars of Loyalism in American history."—Gordon S. Wood, Brown University

"The sophistication and solid research exhibited in the substantive essays that comprise the core of The Consequences of Loyalism, will warm Calhoun's heart. Collectively, they raise the study of loyalists to an entirely new level and deserve the close attention of students interested in study not just of the American War but of other civil wars."—Jack P. Greene, Johns Hopkins University

"This is an ideal festschrift. Because it honors a scholar who led a whole generation of historians in paying empathetic attention to the Americans who remained loyal to Britain during the American Revolution. And because its contributors substantially advance understanding of who the Loyalists were, why they remained loyal, and what happened to them because of their loyalty"—Mark Noll, University of Notre Dame

"When it appeared nearly half a century ago, Robert Calhoon's Loyalists in Revolutionary America was a landmark in the maturation of American Loyalist studies. So it is apt that Calhoon's Loyalist work is now honoured by a formidable collection of essays, mostly from a brand new generation of Loyalist scholars."—David Bell, University of New Brunswick

"This collection of fifteen essays about Loyalists honors the scholarship and mentorship of Robert McCluer Calhoon... readers will be rewarded by this volume's range, consistent quality, and up-to-date assessments."—Journal of Southern History

"The jewel of this book is the raising of our consciousness toward those in early America who wished to remain loyal to the "crown"... the essays give us the option to begin to learn more about the Revolutionary War as a "civil war". This is a good book for public and academic libraries. Also recommended for archives and historical collections."—Southeastern Librarian

"The Consequences of Loyalism is a welcome addition to Loyalist studies and to the historiography of the American revolutionary era. It is a fine tribute to Robert Calhoon, whose scholarship, advice, and encouragement have influenced and inspired many scholars."—Journal of American History