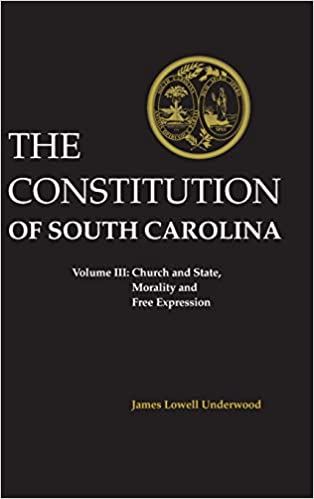 In this volume Professor Underwood considers the constitutional doctrines that address the separation of church and state and the free exercise of religion. These doctrines are treated in historical and contemporary contexts extending from early colonial times to the most recent disputes over freedom of religion. The interaction of state and federal constitutional law is considered in detail. Underwood examines leading state and colonial cases and statutes and cites pivotal United States Supreme Court cases that have had an impact on South Carolina law.

Among the issues discussed are Sunday Blue Laws, state financial contributions to religious groups, unorthodox forms of worship, and religion in the public schools. Many of the topics covered not only have deep historical roots but also are the subjects of contemporary public debate, legislation, and litigation. Issues such as prayer in the schools, itinerant evangelism, and physically dangerous forms of worship, such as those involving drug use, are constantly in the headlines. In a key chapter, the author explores the debate over the various patterns that the relationship between church and state authorities can take.

In the final section, Professor Underwood examines free expression issues which have been closely related to church and state disputes. This portion focuses specifically on state obscenity laws, provisions regulating personal morality. The discussion begins with early nineteenth-century cases and statutes and ends with the most recent cases and statuatory amendments.


James Lowell Underwood received his Ph.D. in 1962 from Emory University and his LL.M. in 1966 from Yale University. He is currently the Strom Thurmond Professor of Law at the University of South Carolina, where he has taught at the School of Law since 1966.