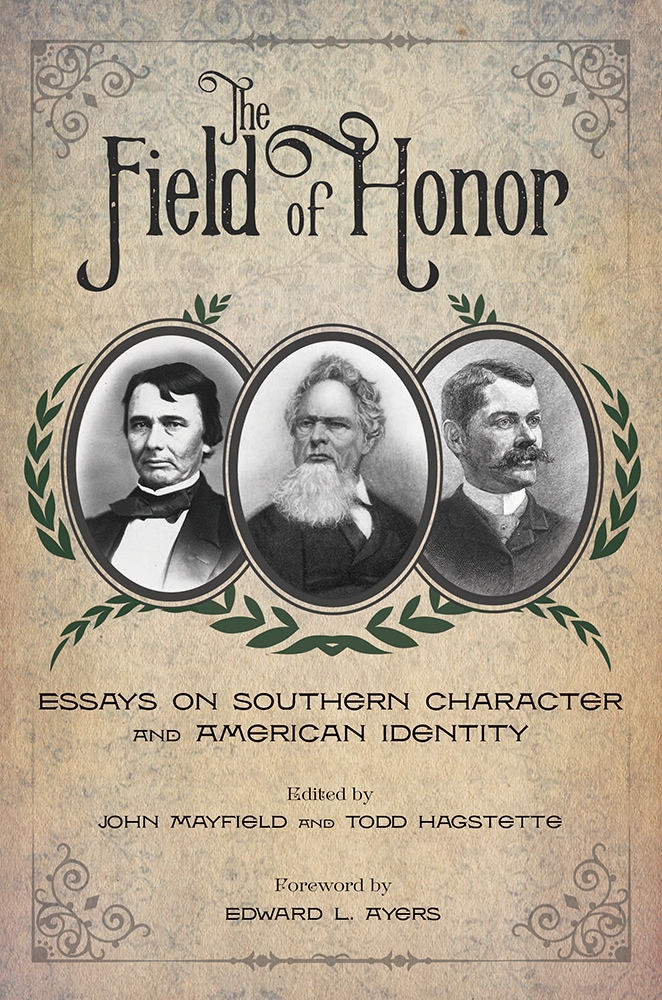 The Field of Honor

For more than thirty years, the study of honor has been fundamental to understanding southern culture and history. Defined chiefly as reputation or public esteem, honor penetrated virtually every aspect of southern ethics and behavior, including race, gender, law, education, religion, and violence. In The Field of Honor: Essays on Southern Character and American Identity, editors John Mayfield and Todd Hagstette bring together new research by twenty emerging and established scholars who study the varied practices and principles of honor in its American context, across an array of academic disciplines.

Following pathbreaking works by Bertram Wyatt-Brown, Dickson D. Bruce, and Edward L. Ayers, this collection notes that honor became a distinctive mark of southern culture and something that—alongside slavery—set the South distinctly off from the rest of the United States. This anthology brings together the work of a variety of writers who collectively explore both honor's range and its limitations, revealing a South largely divided between the demands of honor and the challenges of an emerging market culture—one common to the United States at large. They do so by methodologically examining legal studies, market behaviors, gender, violence, and religious and literary expressions.

Honor emerges here as a tool used to negotiate modernity's challenges rather than as a rigid tradition and set of assumptions codified in unyielding rules and rhetoric. Some topics are traditional for the study of honor, some are new, but all explore the question: how different really is the South from America writ large? The Field of Honor builds an essential bridge between two distinct definitions of southern—and, by extension, American—character and identity.

"At the same time, the authors of these eighteen concise essays (arranged thematically over five sections) demonstrate that the field of honor was more like a vast iceberg of sociocultural interaction, of which the dueling ground was only the most sensational tip."—The North Carolina Historical Review

"The volume will be a useful supplement to studies of American national moral character as well as to regionalists."—CHOICE

"The Field of Honor brings a veritable bounty for every student of American identity. The essays offer deep research and originality; and, to boot, they revise and update Bertram Wyatt-Brown's Southern Honor. Hats off to Mayfield and Hagstette for their fine writing, thoughtful organizing, and editing of this valuable collection."—Johanna Nicol Shields, professor emerita of history, University of Alabama in Huntsville

"'Southern honor' is a term embracing more than the stereotypical duels fought by aristocratic, antebellum, white males to protect their reputations from boorish attacks. This fascinating volume convincingly and cogently shows that honor is of vital importance to people in a wide variety of social, economic, gender, racial, and religious groups who molded it to their traditions."—James L. Underwood, Distinguished Professor Emeritus of Law, University of South Carolina

"I have long considered John Mayfield one of the broadest-ranging and deepest-thinking historians I know. We shared a long friendship with the great scholar of Southern honor Bertram Wyatt-Brown.The Field of Honor bids fair to be an appended synthesis and analysis of Bert's oeuvre of reflections on the various manifestations of the honor ethic."—Charles Joyner, Burroughs Distinguished Professor Emeritus of Southern History and Culture, Coastal Carolina University