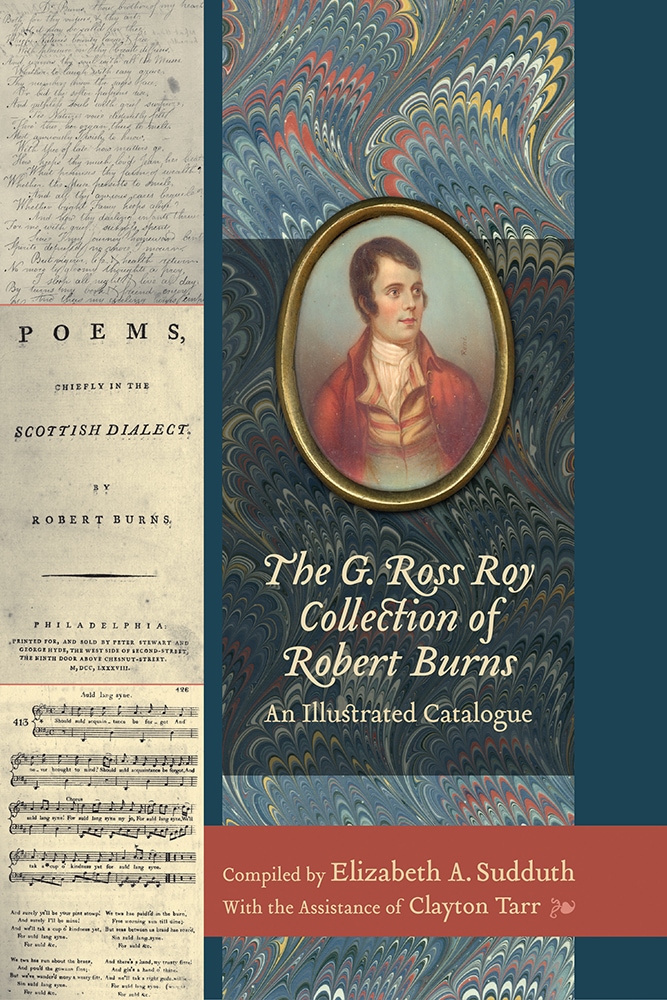 compiled by Elizabeth Sudduth
with the assitance of Clayton Tarr

Established in 1989, the G. Ross Roy Collection of Robert Burns and Burnsiana at the University of South Carolina's Thomas Cooper Library is one of the world's foremost collections dedicated to the study of Scotland's greatest poet. G. Ross Roy, an internationally renowned Burns scholar, inherited the origins of this collection from his grandfather in 1958. Since that time, the dynamic collection has increased fivefold—and continues to expand through new acquisitions.

This illustrated catalogue of the collection's expansive holdings is being published in 2009 on the occasion of Burns's 250th birthday as a guide to the current collection for researchers and collectors alike.

Of the approximately six thousand items described in the catalogue, the largest sections are works by Burns and items of Burnsiana. These include not only separate editions of the poet's major works but also editions with distinctive bindings and variants. Among the notable highlights is one of only two known first-edition copies of The Merry Muses of Caledonia (1799) and the only one with a complete title page. The collection also includes sixteen of the twenty-one known variants of the 1827 reprint edition of that work. Also detailed are landmark collections of Burns, including the exceptionally rare Kilmarnock edition (1786), the 1787 Edinburgh edition with more than thirty annotations in Burns's hand, the 1787 London edition, and James Currie's 1800 edition. The collection includes as well Burns's annotated copy of John Moore's novel Zeluco and a copy of The World with more than sixty ascriptions and comments in Burns's hand. The catalogued Burnsiana features almost every book-length study of the poet as well as numerous pamphlets and books with significant sections about Burns.

Also described in the catalogue, among the collection's manuscripts, is the song "Lesley Bailie—A Scots Ballad" (1792), the only known copy in Burns's hand. And the most unique artifacts of realia seen here are Burns's porridge bowl and horn spoon, inherited by Roy from his grandfather as part of the original collection.

The G. Ross Roy Collection of Robert Burns includes an introduction by G. Ross Roy on the history of the collection. In text and images, the catalogue documents a monumental research collection that serves as an open invitation for further investigations into the life, works, and legacy of Scotland's bard.

"The Roy Collection was built with a passion and outstanding scholarship to give us the finest collection of printed works related to Robert Burns outside of Scotland. The collection at the University of South Carolina's Thomas Cooper Library is to be cherished by lovers of the Bard and particularly those who, in their own way, collect books and Burnsiana. This catalogue will be an essential handbook for all Burnsians, collectors, and researchers."—Bill Dawson, president of the Robert Burns World Federation

"The internationally renowned Roy Collection—the finest collection of Burns material outside Scotland—is here documented in all its richness and diversity. This book is an invaluable treasure trove of information for all who are interested in Burns or Scottish life and literature in the late eighteenth century."—Kenneth Simpson, honorary professor of Burns Studies, University of Glasgow

"A full catalogue of the Roy Collection allows greater access to what is truly a world class collection. Burns scholars will find this volume to be an invaluable guide to many rare and special materials, and all Burnsians will find much to engross them and educate them even as they merely peruse this publication. This catalogue is almost as much of a delight as the collection itself."—Gerard Carruthers, director of the Centre for Robert Burns Studies and head of Department of Scottish Literature, University of Glasgow

"This eagerly awaited publication will be a joy for all serious Burnsians since there has been no major Burns catalogue in recent times. It is a useful research tool by the world's most preeminent Burns scholar. Ross Roy's comments and illustrations regarding the rarer items make this great collection even better for all who wish to study the Scottish bard. This book will be of special value as a guide to the major Burns collection in North America."—Frank Shaw, editor, "Robert Burns Lives!" on www.electricscotland.com