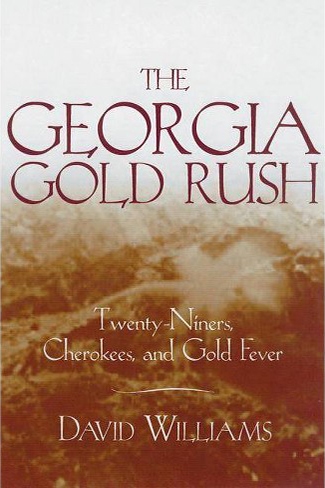 The definitive story of Georgia's role in the first U.S. gold rush

In the 1820s a series of gold strikes from Virginia to Alabama caused such excitement that thousands of miners poured into the region. This southern gold rush, the first in U.S. history, reached Georgia with the discovery of the Dahlonega Gold Belt in 1829. The Georgia gold fields, however, lay in and around Cherokee territory. In 1830 the State of Georgia extended its authority over the area, and two years later the land was raffled off in a lottery. Although they resisted this land grab through the courts, the Cherokees were eventually driven west along the Trail of Tears into what is today northeastern Oklahoma.

The gold rush era survived the Cherokees in Georgia by only a few years. The early 1840s saw a dramatic decline in the fortunes of the southern gold region. When word of a new gold strike in California reached the miners, they wasted no time in following the banished Indians westward. In fact, many Georgia twenty-niners became some of the first California forty-niners.

Georgia's gold rush is now almost two centuries past, but the gold fever continues. Many residents still pan for gold, and every October during Gold Rush Days hundreds of latter-day prospectors relive the excitement of Georgia's great antebellum gold rush as they throng to the small mountain town of Dahlonega.


A professor of history at Valdosta State University, David Williams received his Ph.D. in history from Auburn University in 1988. The author of numerous articles on Georgia history, the Old South, Appalachia, and the Civil War, Williams is the author of Rich Man's War: Class, Caste, and Confederate Defeat in the Lower Chattahoochee Valley and Johnny Reb's War: Battlefield and Homefront and the coauthor of Gold Fever: America's First Gold Rush and Plain Folk in a Rich Man's War: Class and Dissent in Confederate Georgia.

"The Georgia Gold Rush does bring together in a single, very readable narrative the secondary and printed primary materials on this subject, with important emphasis on Native Americans and other overlooked aspects of this story."—Georgia Historical Quarterly

"This book will serve as the standard reference on the subject."—North Carolina Historical Review