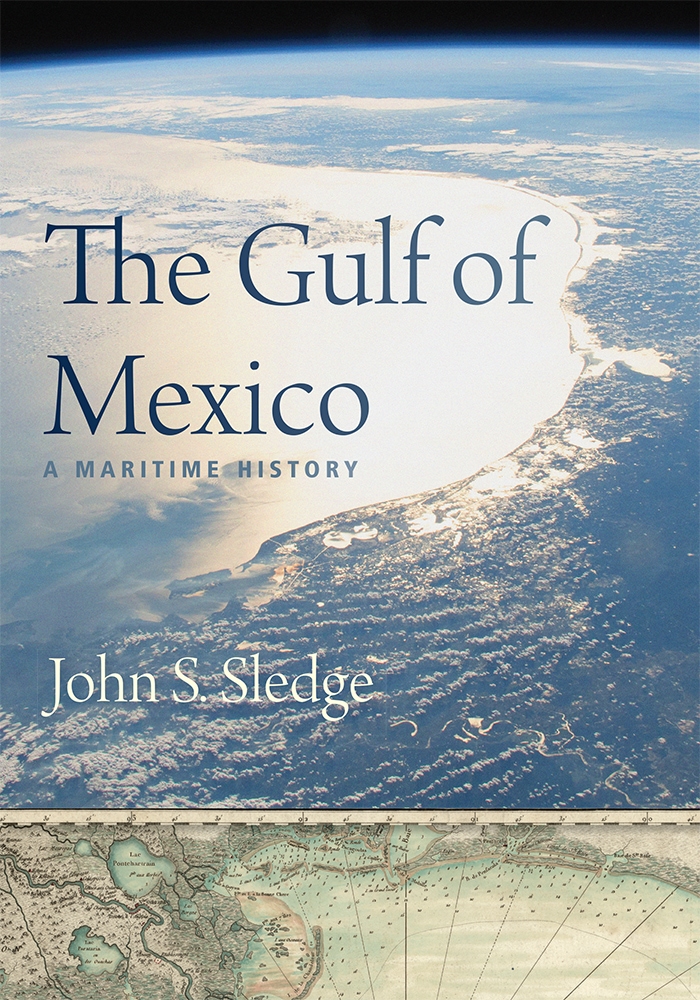 The Gulf of Mexico

The Gulf of Mexico presents a compelling, salt-streaked narrative of the earth's tenth largest body of water. In this beautifully written and illustrated volume, John S. Sledge explores the people, ships, and cities that have made the Gulf's human history and culture so rich. Many famous figures who sailed the Gulf's viridian waters are highlighted, including Ponce de León, Robert Cavelier de La Salle, Francis Drake, Elizabeth Agassiz, Ernest Hemingway, and Charles Dwight Sigsbee at the helm of the doomed Maine. Sledge also introduces a fascinating array of people connected to maritime life in the Gulf, among them Maya priests, French pirates, African American stevedores, and Greek sponge divers.

Gulf events of global historical importance are detailed, such as the only defeat of armed and armored steamships by wooden sailing vessels, the first accurate deep-sea survey and bathymetric map of any ocean basin, the development of shipping containers by a former truck driver frustrated with antiquated loading practices, and the worst environmental disaster in American annals.

Occasionally shifting focus ashore, Sledge explains how people representing a gumbo of ethnicities built some of the world's most exotic cities—Havana, way station for conquistadores and treasure-filled galleons; New Orleans, the Big Easy, famous for its beautiful French Quarter, Mardi Gras, and relaxed morals; and oft-besieged Veracruz, Mexico's oldest city, founded in 1519 by Hernán Cortés. Throughout history the residents of these cities and their neighbors along the littoral have struggled with challenges both natural and human-induced—devastating hurricanes, frightening epidemics, catastrophic oil spills, and conflicts ranging from dockside brawls to pirate raids, foreign invasion, civil war, and revolution. In the modern era the Gulf has become critical to energy production, fisheries, tourism, and international trade, even as it is threatened by pollution and climate change. The Gulf of Mexico: A Maritime History is a work of verve and sweep that illuminates both the risks of life on the water and the riches that come from its bounty.

John S. Sledge is senior architectural historian for the Mobile Historic Development Commission and a member of the National Book Critics Circle. He holds a bachelor's degree in history and Spanish from Auburn University and a master's in historic preservation from Middle Tennessee State University. Sledge is the author of six previous books, including Southern Bound: A Gulf Coast Journalist on Books, Writers, and Literary Pilgrimages of the Heart; The Mobile River; and These Rugged Days: Alabama in the Civil War.

"Evident in each judiciously crafted sentence of this elegant book, John S. Sledge's love of the Gulf of Mexico is appropriately infectious. He rightfully celebrates and affirms the southern sea's enriching past and gives readers reason to want for its wholesome and meaningful future. Like the sea itself, this book is a gift."—Jack E. Davis, Pulitzer Prize-winning author of The Gulf: The Making of an American Sea

"John Sledge is a historian of the first order, and he is also an exceptional writer. This is history at its best—engaging, focused on the people, and well-researched. The history of the Gulf is an international, multi-generational tale, and Sledge navigates it like a skilled mariner."—James Delgado, maritime archaeologist, historian, explorer, and author

"John Sledge's The Gulf of Mexico is an admirably compact and fascinating overview of a coast and sea that remain almost unknown to most Americans. Its broad coverage of everything from Native American sailors to modern industrial and recreational fishing makes it a welcome and inclusive addition to the literature of the maritime history of the Americas."—Lincoln Paine, author of The Sea and Civilization: A Maritime History of the World

"In his paean to the Gulf of Mexico, John Sledge skillfully pilots readers past the familiar beaches and hurricanes of the South's backdoor to the Atlantic. Along the way he reveals 500 years of audacious history afloat on its often roiling waters, with a cast of seagoing characters as diverse as the watery biome beneath their hulls."—Gregory A. Waselkov, author of A Conquering Spirit: Fort Mims and the Redstick War of 1813-1814

"Fascinating insights on the Gulf – geology, ecology, weather and panorama of human interaction – in all its magnificence and fearsome wonder create a book that should be embraced by anyone living on its shores."—Lagniappe

"There are many books about specific aspects of the Gulf of Mexico's sprawling history. Considerably less abundant are broad historical overviews, and heretofore completely lacking has been a popular maritime history from dugout canoe to shipping container. The Gulf of Mexico changes that."—Alabama Seaport Magazine

"The Gulf basin has never seemed more connected than it does in Sledge's capable hands...The Gulf of Mexico is a thoroughly interesting and engrossing narrative, and one which presents the clearest picture yet painted of the centrality of the Gulf to American history and the shared heritage of the broader basin. The book stands as essential reading for those seeking to learn more about the broad area where its waves lap ashore, and the people who call it home."—The Historians Manifesto

"a valuable resource for anyone who wants to conduct research in or around the Gulf... [John Sledge] ties together several historical elements that reveal the varied and complex history that is the Gulf of Mexico."—Sea History Magazine

"Alabamian Sledge, author a number of books on his home region, offering a rare combination of sound history and literate writing, gives us a centuries-spanning look at human activity in the Gulf of Mexico, an inland sea some two-thirds the area of the Mediterranean which is generally overlooked in most histories. He does an excellent job of weaving cultural, economic, social, and political events into a quite readable narrative."—The NYMAS Review

"This maritime history of the Gulf fills an important need. The first book to undertake this ambitious topic, The Gulf of Mexico sails into new territory. Sledge embraces a topic that is voluminous and offers a readable work supported by sound research."—Southwestern Historical Quarterly

"is a marvelous and comprehensive description of the Gulf of Mexico."—Mark Lardas, marklardas.com

"The Gulf of Mexico is like a stable, comfortable, working pleasure boat, and John Sledge her knowledgeable captain who knows from long experience where the lunkers live. His love for the Gulf and all its wonders, natural and cultural, is apparent. You're going to have a lovely time offshore with him, catch some great stories, and learn a bit while you're at it."—Alabama Review

"John S. Sledge gives a detailed account of the region from the Seminole Indians, its earliest inhabitants, to modern oil workers on rigs far out to sea. The book is well indexed, amply footnoted and has superb historical maps...a more than serviceable history of a region that the author rightly calls 'this beautiful, pocketed sea'."—International Affairs

"Sledge's work is a pleasurable readhis ability to create narrative and give meaning to the history of environmental, social, and political contests in the Gulf of Mexico gives credence to the need for well-executed, scholarly-sourced, public-facing popular histories."—Louisiana History