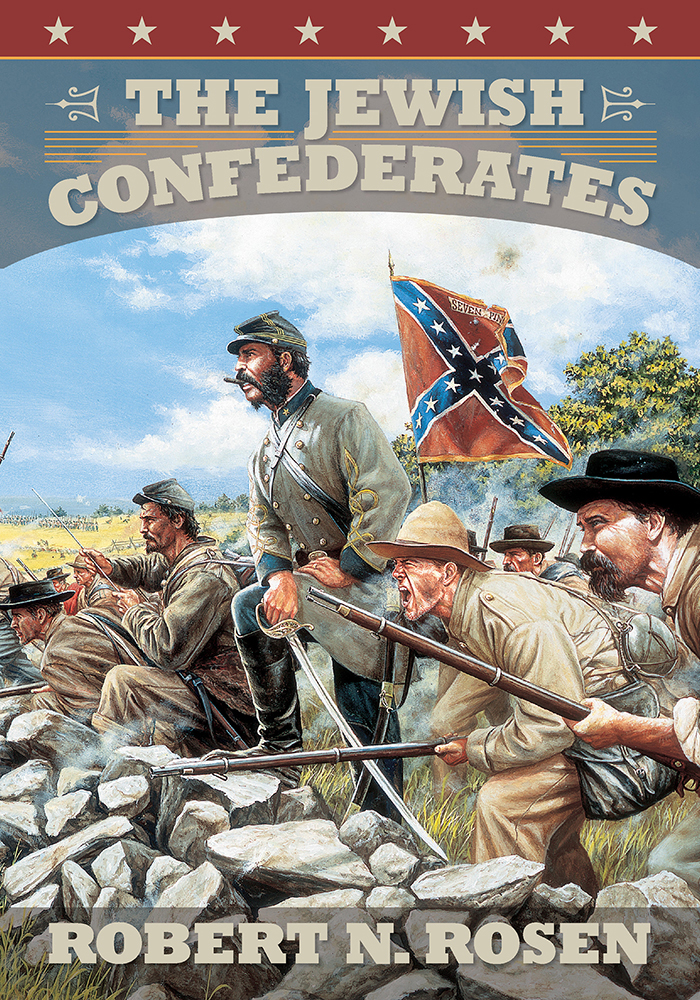 In The Jewish Confederates, Robert N. Rosen introduces readers to the community of Southern Jews of the 1860s, revealing the remarkable breadth of Southern Jewry's participation in the war and their commitment to the Confederacy. Intrigued by the apparent irony of their story, Rosen weaves a complex chronicle that outlines how Southern Jews—many of them recently arrived immigrants from Bavaria, Prussia, Hungary, and Russia who had fled European revolutions and anti-Semitic governments—attempted to navigate the fraught landscape of the American Civil War.

This chronicle relates the experiences of officers, enlisted men, businessmen, politicians, nurses, rabbis, and doctors. Rosen recounts the careers of important Jewish Confederates; namely, Judah P. Benjamin, a member of Jefferson Davis's cabinet; Col. Abraham C. Myers, quartermaster general of the Confederacy; Maj. Adolph Proskauer of the 125th Alabama; Maj. Alexander Hart of the Louisiana 5th; and Phoebe Levy Pember, the matron of Richmond's Chimborazo Hospital. He narrates the adventures and careers of Jewish officers and profiles the many Jewish soldiers who fought in infantry, cavalry, and artillery units in every major campaign.


Robert N. Rosen was born and raised in Charleston, South Carolina. Three of his grandparents were emigrants from the "Pale of Settlement"—Russia, Poland, and Belorus. The other grandparent was born in this country just after her parents arrived from Austria in the 1890s. Rosen attended public schools in Charleston, where his high school history teacher was the Charleston historian Solomon Breibart. He studied at the University of Virginia and at Harvard University, where he received an M.A. in history, as well as at the University of South Carolina Law School. The author of A Short History of Charleston and Confederate Charleston: An Illustrated History of the Place and the People During the Civil War, he practices law in Charleston and is listed in The Best Lawyers in America. Rosen has served on the boards of the South Carolina Historical Society and Historic Charleston Foundation, and has chaired the Arts and History Commission of the City of Charleston.

"This exhaustive study sheds light on a little-remarked curiosity of the Civil War's history: The Lost Cause claimed a great many Jewish partisans, and a regime dedicated to the defense of human slavery proved remarkably resistant to antisemitism."—The Washington Post

"This groundbreaking study is liberally illustrated with photographs and maps, and is written clearly and energetically as a trade book, despite its academic stamp and thoroughness"—Publishers Weekly

"Larger public and academic libraries should consider this readable book, as should all libraries with strong Judaic or military collections."—Library Journal

"The Jewish Confederates is a fascinating, comprehensive look at a great number and variety of soldiers and non-combatants, replete with excerpts from letters and diaries that will give the reader insights into the spirit of the time. For the Civil War scholar looking for something different on the period, this book is highly recommended."—Civil War Times Illustrated

"The Jewish Confederates is a thoughtful and readable narrative packed with information and insights... a fine piece of scholarship and a fascinating read."—South Carolina Historical Magazine

"The Jewish Confederates indeed makes a significant contribution to the literature of the Civil War South and American Jewish history... essential reading in the field."—The Florida Historical Quarterly

"first-class... thorough, deeply researched, and engaging... anyone doing research on any aspect of southern Jewry would be foolhardy to ignore."—Journal of Southern History

"Robert N. Rosen has provided a comprehensive look at the Southern Jewish experience in the Confederacy... His work fills a major gap in the historiography of the Confederacy and should inspire others to look at similar ethnic experiences of the Civil War."—Louisiana History

"Robert Rosen's emendation to the American Jewish record is must reading not only for his co-religionists but for those who study the Civil War. In revealing the patriotism of Southern Jewry, Rosen has dealt a blow against bigotry."—American Enterprise

"An eye-opening, myth-shattering, stereotype-breaking work of originality, elegance, and wisdom. A must-read for Civil War buffs, Jewish history fans, and all Americans interested in learning—and you will learn much—about Jewish southerners who placed loyalty to their adopted states above the moral teachings of their tradition (at least as we now interpret them). You may not agree with these Jewish Confederates, but you will surely understand them better."—Alan M. Dershowitz, Harvard Law School

"In this fascinating book Robert N. Rosen illuminates a long-neglected dimension of Confederate history, and, in so doing, makes an important contribution to the debate over the depth of southern white unity and Confederate loyalty. Meticulously researched, The Jewish Confederates makes clear that across the social and economic spectrum Jewish southerners overwhelmingly supported the Confederacy. With fascinating detail about well-known and little-known men and women, Rosen demonstrates that on both the battlefield and the homefront Jewish Confederates proved their loyalty, a loyalty they maintained after 1865 in their embrace of the Lost Cause. All who want to understand the nineteenth-century South should read this book."—William J. Cooper, Jr., Louisiana State University

"Apart from a few prominent individuals such as Judah P. Benjamin and Phoebe Yates Pember, Jewish Confederates have been virtually invisible in the massive body of published work on the Civil War. Robert N. Rosen's impressive study illuminates the world of southern Jews and their role in the Confederacy's bid for independence. It is a major contribution to Confederate studies, and to the broader literature on the Civil War."—Gary W. Gallagher, University of Virginia

"Perhaps no identifiable group of Southerners represented a greater paradox than the Jewish community spread all the way from Richmond to New Orleans. In The Jewish Confederates Robert N. Rosen opens a window on the unlikely story of a people apart, with their own religion and cultural customs, functioning within a Southern community that regarded itself as separate and distinct from other Americans. Through the lives of people as diverse as the Confederate statesman Judah Benjamin and the Louisiana teenager Clara Solomon, Rosen reveals the surprising tolerance in the South for this one minority, and the sacrifices they made to prove themselves full citizens of the supposedly xenophobic Southern republic."—William C. Davis, Virginia Tech

"The Jewish Confederates is the story of a people defining themselves. Robert Rosen has a wonderful capacity to describe people and their character in capsule. He's given us an important book on a very significant topic—felicitously written and festooned with photographs."—Emory M. Thomas, University of Georgia