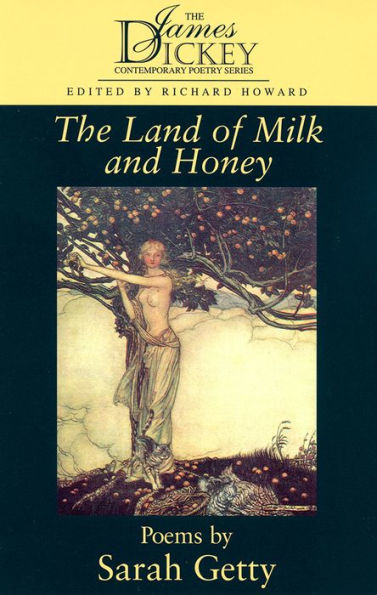 The Land of Milk and Honey

Sarah Getty's poems represent the work of the New Woman, as the nineteenth century called her, now middle-aged, with daughters, private lives, and weathered marriages—but no male figure steps forward in any overshadowing role. Meditating on her own experience of girlhood, marriage, and the mothering of a daughter, Getty combines a feminist sensibility with a profound sense of connection to the natural and mythic realms from which the forces of generation emerge. Her poems, centered in domestic suburbia, range outward through those ancient realms and backward through the history of her family's women. Getty is concerned to explore the losses and absences of the spirit as rehearsed by the flesh, its old enemy and friend. In doing so she reveals a startling sense of humor, which is another way of saying that she has come to terms with reality. These poems—lively, thoughtful, autonomous—reflect her response to that reality.

Sarah Getty grew up near Chicago, attended Stanford University, and received a Ph.D. in English literature from the University of Pennsylvania. The manager of foundation and government support at the Museum of Science in Boston, Getty lives with her husband in Bedford, Massachusetts. Her poetry has appeared in the Paris Review, Shenandoah, and Western Humanities Review and in two anthologies.

"Sarah Getty tells us in vivid sensuous detail how it was in the Illinois of her childhood, where corn fields were 'our forest, our ocean.' Her sense of family history illuminates the title poem and makes radiant the role of women over more than a century of physical and metaphysical voyaging. Here, poignantly, are 'mortals telling their stories."—Maxine Kumin

"Sarah Getty treats well subjects many of her contemporaries treat clumsily: the uncanny love between mothers and daughters; the complexities of feminine comradeship; the fierce beauty women find in nature, the body, and sex. A poet capable of disabused affirmation, Getty writes: 'We've come, I believe, into that land of milk and honey that pilgrims are vouchsafed in the wilderness.' Readers are likely to experience a similar sense of arrival, coming to the fertile landscape of this book, informed by myths of various degree and fully infected by the love of language."—George Bradley

"It's extraordinary in The Land of Milk and Honey how fully Sarah Getty re-imagines a prairie girlhood we thought we understood, an American landscape we thought we recognized, the ineffable tangles between female generations. With a sure hand, she builds a poetry which, quite unexpectedly, breaks from plain imagery and speech into narrative music of transfiguring, almost visionary, beauty. This is a wonderful collection."—Honor Moore