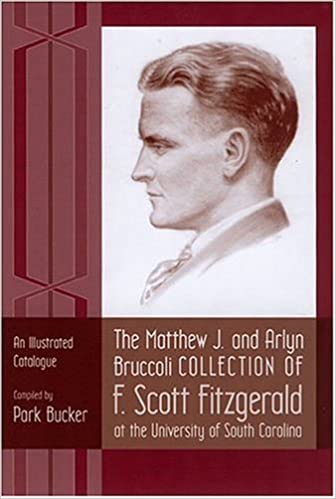 The Matthew J. and Arlyn Bruccoli Collection of F. Scott Fitzgerald at the University of South Carolina

This book provides a descriptive inventory of the major components in the Matthew J. and Arlyn Bruccoli Collection of F. Scott Fitzgerald in the Thomas Cooper Library at the University of South Carolina in Columbia. The collection documents the literary career and thought of one of America's greatest novelists.

The catalogue includes a listing of editions of all English-language printings of books by Fitzgerald including proof and review copies and the collection's many books inscribed by the author. Fitzgerald manuscripts, revised typescripts, correspondence, and business documents are also cited, as well as Fitzgerald screenplays and Princetoniana. There is a separate section on Zelda Fitzgerald. Highlights of the collection include the only set of unrevised galleys for The Great Gatsby, titled Trimalchio; one of the two existing acting scripts for Fie! Fie! Fi-Fi!; Fitzgerald's annotated copy of James Joyce's Ulysses; a copy of Ernest Hemingway's For Whom the Bell Tolls inscribed to Fitzgerald; and Fitzgerald memorabilia such as his engraved whiskey flask, a briefcase, and other family materials. Each item is described in detail—including title, publication information, and call number, where relevant, and explanatory notes. Many items in the collection, including all Fitzgerald inscriptions, are illustrated.

The Matthew J. and Arlyn Bruccoli Collection of F. Scott Fitzgerald at the University of South Carolina provides a valuable resource not only for Fitzgerald scholars, but also for those interested in Fitzgerald's friends and literary associates (including Ernest Hemingway, James Joyce, Ring Lardner, John Dos Passos, and Maxwell Perkins) and in American culture between the world wars.


Park Bucker is an assistant professor of English at the University of South Carolina, Sumter. With Matthew J. Bruccoli he coedited To Loot My Life Clean: The Thomas Wolfe–Maxwell Perkins Correspondence (University of South Carolina Press, 2000) and Catch As Catch Can: The Collected Stories and Other Writings. He also coauthored with Bruccoli Joseph Heller: A Descriptive Bibliography. Bucker lives in Columbia.

"The catalogue is a fascinating annotated inventory of the abundance of materials pertaining to F. Scott Fitzgerald gathered over a lifetime by Matthew J. Bruccoli, whose scholarly contributions to the appreciation of that novelist have enlightened and exhilarated all of us who revere Fitzgerald as a literary artist, an ever-inspiring master of the American language."—Thomas Berger

"An indispensable guide to one of the greatest literary collections in America—if not anywhere. Matthew J. Bruccoli's introduction, all about book collecting, by itself is worth the price of admission."—John Jakes