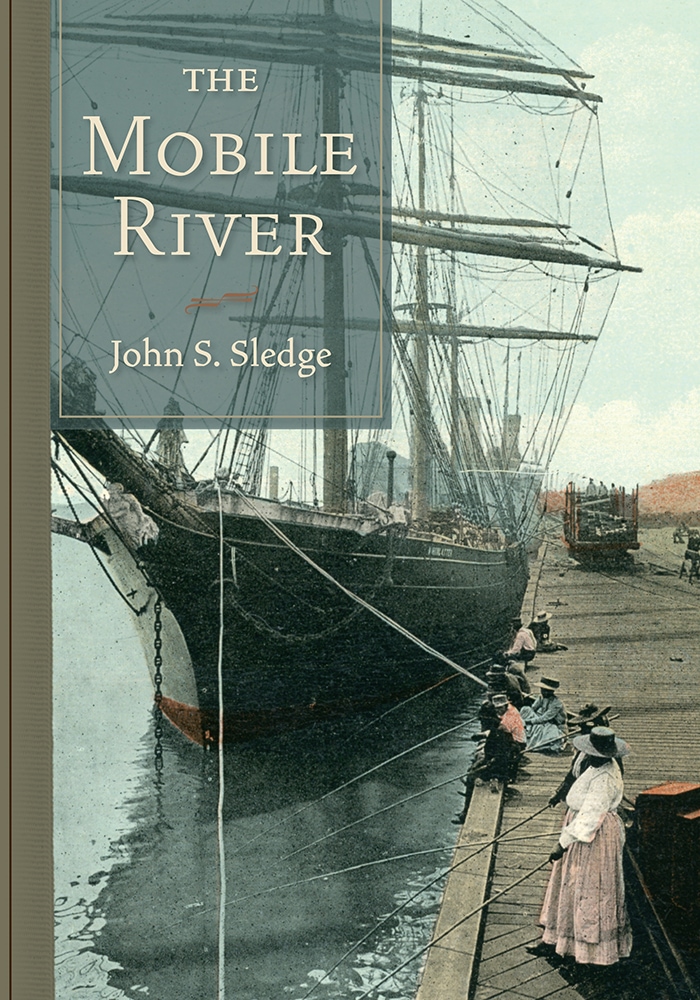 The Mobile River presents the first-ever narrative history of this important American watercourse. Inspired by the venerable Rivers of America series, John S. Sledge weaves chronological and thematic elements with personal experiences and more than sixty color and black-and-white images for a rich and rewarding read.

The Mobile River appears on the map full and wide at Nannahubba, fifty miles from the coast, where the Alabama and the Tombigbee rivers meet, but because it empties their waters into Mobile Bay and subsequently the Gulf of Mexico, it usurps them and their multitudinous tributaries. If all of the rivers, creeks, streams, bayous, bogues, branches, swamps, sloughs, rivulets, and trickles that ultimately pour into Mobile Bay are factored into the equation, the Mobile assumes awesome importance and becomes the outlet for the sixth largest river basin in the United States and the largest emptying into the Gulf east of the Mississippi River.

Previous historians have paid copious attention to the other rivers that make up the Mobile's basin, but the namesake stream along with its majestic delta and beautiful bay have been strangely neglected. In an attempt to redress the imbalance, Sledge launches this book with a first-person river tour by "haul-ass boat." Along the way he highlights the four diverse personalities of this short stream—upland hardwood forest, upper swamp, lower swamp, and harbor.

In the historical saga that follows, readers learn about colonial forts, international treaties, bloody massacres, and thundering naval battles, as well as what the Mobile River's inhabitants ate and how they dressed through time. A barge load of colorful characters is introduced, including Indian warriors, French diplomats, British cartographers, Spanish tavern keepers, Creole women, steamboat captains, African slaves, Civil War generals and admirals, Apache prisoners, hydraulic engineers, stevedores, banana importers, Rosie Riveters, and even a few river rats subsisting off the grid—all of them actors in a uniquely American pageant of conflict, struggle, and endless opportunity along a river that gave a city its name.


John S. Sledge is senior architectural historian for the Mobile Historic Development Commission and a member of the National Book Critics Circle. He holds a bachelor's in history and Spanish from Auburn University and a master's in historic preservation from Middle Tennessee State University. Sledge is the author of three books on Mobile's historic architecture, as well as a collection of literary criticism, Southern Bound: A Gulf Coast Journalist on Books, Writers, and Literary Pilgrimages of the Heart, published by the University of South Carolina Press. He and his wife, Lynn, live in Fairhope, Alabama, half a mile from Mobile Bay.

"A fine, fascinating book. John S. Sledge introduces us to four centuries worth of heroes and rogues on one incredible American river."—Winston Groom

"This book is a must for those thirsty for knowledge."—Idgie, Dew on the Kudzu

"Who would imagine a river only 45 miles long could encompass such a rich past - a 13th-century Mississippian chiefdom, a French-colonial counterpart to English Jamestown, the last ship carrying enslaved Africans to the US? In his evocative and well-written saga, John Sledge brilliantly explores the myriad ways human history has entwined with the Mobile River."—Gregory A. Waselkov, author of A Conquering Spirit: Fort Mims and the Redstick War of 1813-1814

"We think of rivers as natural phenomena, but as John Sledge shows, the rivers we know by name and experience are human inventions. Brimming with anecdotes, 'The Mobile River' is an eye-opening introduction to the waterways and people that have written the history of this underappreciated region of the United States."—Lincoln Paine, author of The Sea and Civilization: A Maritime History of the World

"The Mobile River is the latest affirmation of John Sledge's extraordinary talent as a historical researcher and author. In this masterful, exquisitely crafted work, he takes us along and underneath the Mobile River and inland as well as he weaves his compelling narrative of over 300 years of our region's rich history. This book promises to be the definitive work on this topic."—David E. Alsobrook, director, History Museum of Mobile

"Though the Mobile is a short river, it has a long and colorful history. John S. Sledge tells the Mobile River's story with style, grace, and insight. This is a splendid book. I cannot think of another study where the connections between a stream and a city are more clearly identified and explained."—Harvey H. Jackson III, Professor Emeritus of History, Jacksonville State University