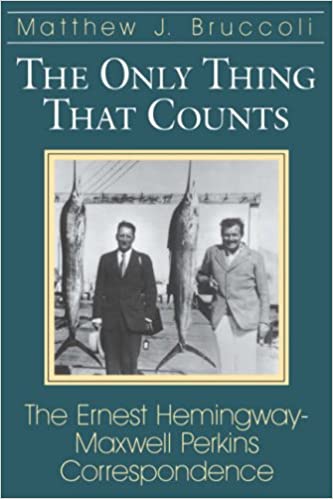 The Only Thing That Counts

Chronicles a legendary career and a momentous era in literary history

In 1924 F. Scott Fitzgerald told his editor Maxwell Perkins about a young American expatriate in Paris, an unknown writer with a "brilliant future." When Perkins wrote to Ernest Hemingway several months later, he began a correspondence spanning more than two decades and charting the career of the most influential American author of this century. The letters collected here are the record of a remarkable professional alliance—an enduring friendship between editor and author—and of Hemingway's development as a writer.

"Carefully selected, elegantly and efficiently edited, the letters in The Only Thing That Counts do more than tell us (in their own unguarded voices) a great deal about the lives and works of Maxwell Perkins and Ernest Hemingway. These letters also offer a dramatic education in American literary history and the publishing scene. This is a book in which readers and writers alike will find full measures of delight and information."—George Garrett

"Over time Hemingway's life became to him his most important work-in-progress, turning out so disappointingly that some beholders have lost track of the great work he did before he came apart. These letters restore the balance. They show him at his real work before things started to go wrong, remaking writing in America. They are invaluable."—George V. Higgins

"The sources for many of the legendary Hemingway stories are here, told for the first time in Hemingway's own short, clear, seemingly careless voice."—Boston Globe

"Perhaps the greatest pleasure to be gotten from this highly selective version of the Hemingway-Perkins exchanges, which is well served by Bruccoli's background annotations and a series of helpful chronological frames, is the chance to re-experience Perkins' pundit voice. . ."—Georgia Review