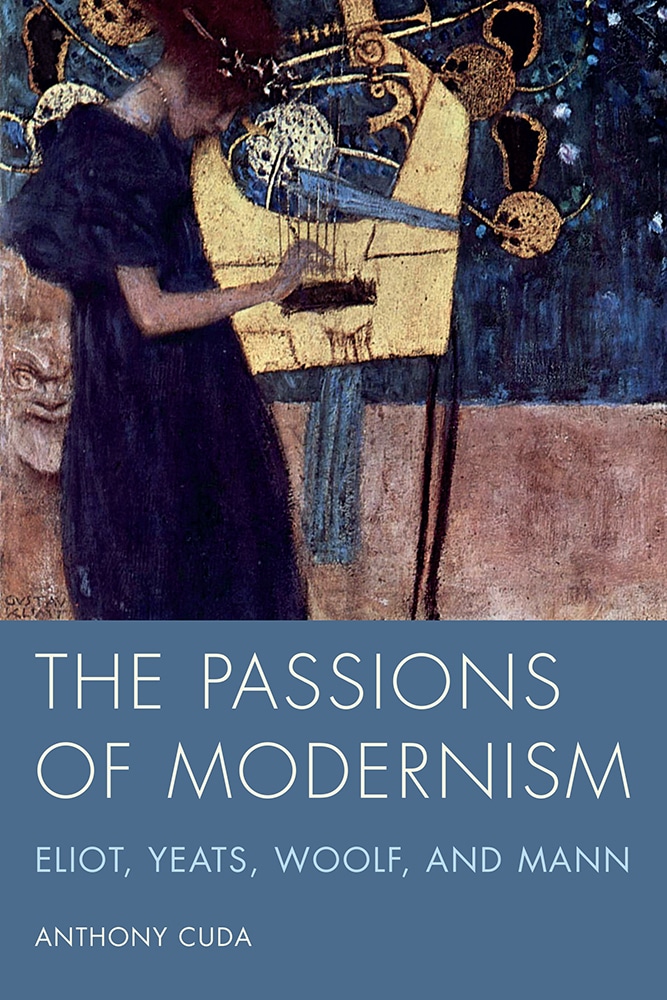 The Passions of Modernism

Upending the traditional view of modernism as defined by skepticism and emotional detachment, Anthony Cuda argues for a perspective that emphasizes instead its deep commitment to understanding human vulnerability, powerlessness, and the unpredictable energies of passion. In The Passions of Modernism, Cuda explores how four modernist writers—T. S. Eliot, W. B. Yeats, Virginia Woolf, and Thomas Mann—conceptualize passion, how they dramatize its upheavals and illuminations, and how it affects their ideas about the creative act.

Cuda argues that many literary scholars have not allowed modernism to get far enough out of control. In this work he seeks to demonstrate that it was, from its inception, an expression of the desire to relinquish the very control that its critics mistakenly attribute to it. To this end Cuda examines how several representative writers confront helplessness and passivity in their work and what this confrontation means for their conceptions of creativity, consciousness, and the life of emotions. The modernist artistic process, Cuda suggests, is a register of the mind's encounter with forces beyond its control.

Resuscitating the classical definition of passion from the Latin passio, "to be moved" or "to be acted on," Cuda's study indicates that the modernist attraction to passivity arises from a desire to gauge the limits of the active mind and to rethink psychology and aesthetics from the perspective of the moved instead of the mover. Focusing on well-known texts as well as uncollected and archival materials—such as Yeats's letters and Eliot's prose—Cuda sheds new light on four canonical writers by examining their work in terms of "passion scenes," vivid, intense tropes, situated somewhere between exhilaration and terror, that recur with insistent regularity over an artist's entire career, exerting an unusual psychological force on the creative mind that conjures them. Cuda also offers a corrective to debates about contemporary poetry and postmodernism by showing how criticism continues to rely upon misconceptions about affect and impersonality in modernism.


Anthony Cuda is an assistant professor at the University of North Carolina at Greensboro, where he teaches courses in American literature and twentieth-century poetry. He is the coeditor of the Complete Prose of T. S. Eliot: Volume II, 1919–1925.

"The Passions of Modernism is a well-written, thoughtful, and carefully constructed approach to the works of T.S. Eliot, W. B. Yeats, Virginia Woolf, and Thomas Mann that helps us see these modernist writers in a new light. Antony Cuda makes a convincing case for the centrality of passion in the works of each writer through nuanced readings of both canonical and lesser known texts. The connections he makes here are original, clever, and often surprising. The result is a very readable and engaging book that advances our understanding of Moderism by establishing the importance of emotion to the aesthetics of the movement—a valuable corrective to critical studies which have too often taken these seemingly detached works at face value. Cuda's alternative reading opens new avenues for future inquires and enriches current dialogues in Modernist Studies."—Richard Badenhausen, professor and Kim T. Adamson Chair, Westminster College, and author of T. S. Eliot and the Art of Collaboration