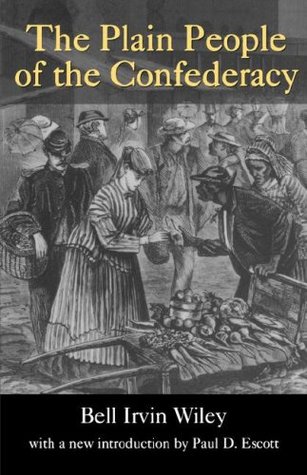 The Plain People of the Confederacy

Widely hailed for his realistic portrayals of the common soldier of the Civil War, Bell Irvin Wiley upset carefully cultivated, deeply held southern myths about the Lost Cause with the 1944 publication of The Plain People of the Confederacy. His engaging and timeless look at the Confederate experience of soldiers, African Americans, and women also sparked a debate about the reasons for southern defeat that continues among historians to this day. Republished here with Paul Escott's new introduction and fresh appraisal of the book's influence, this classic work reveals a far more complex, conflicted, and intriguing society than the unified and idealized version created and perpetuated in the wake of surrender.

Wiley broke new ground by challenging southern myths about a contented and loyal slave population, a self-sacrificing citizenry united in support of states' rights, and a military unmarred by cowardice and vice. Unearthing a wealth of correspondence, government documents, and other firsthand accounts, Wiley brought to center stage the question of popular morale and insisted on its importance in shaping the fate of the Confederacy. He showed that the Confederacy was racked by dissension and that the heart of the South's problems lay in class resentments and poor governmental policy rather than in military reverses.


One of the foremost historians to chronicle the experiences of Civil War soldiers and civilians, Bell Irvin Wiley (1906–1980) wrote The Life of Johnny Reb and The Life of Billy Yank.

Paul Escott is a professor of history at Wake Forest University in Winston-Salem, North Carolina, and the author of North Carolina Yeoman: The Diary of Basil Armstrong Thomasson, 1853–1862.

"He [Wiley] challenges Southern myths about contented and loyal slaves, self-sacrificing citizens united in common cause, and a military unmarred by cowardice and vice."—Lexington County Chronicle