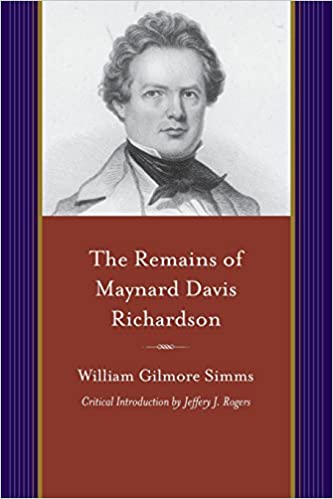 The Remains of Maynard Davis Richardson

With a Memoir of His Life By His Friends

One of Simms's most personal works, The Remains of Maynard Davis Richardson is an editorial project the writer undertook after his good friend Richardson's premature death in 1832. While details about their friendship remain scarce, it is known that Richardson accompanied Simms on the writer's first trip to the North, and Simms dedicated his long 1832 narrative poem Atalantis to him. Simms's feelings for Richardson are most clearly stated in his letters. Writing to Lawson on 25 October 1832, Simms commented on the "melancholy intelligence of the death of a very near & dear friend, Maynard Richardson." The Remains of Maynard Davis Richardson: With a Memoir of His Life By His Friends consists of a sizeable biographical sketch of Richardson, along with over two hundred pages of literary, critical, and political writings by Davis edited and annotated by Simms. Included are poetry and aphorisms; essays on John C. Calhoun, tariffs, and other political and philosophical subjects; as well as critical writings on subjects as varied as the value of Classical education and the possibilities of a distinctly American literature.