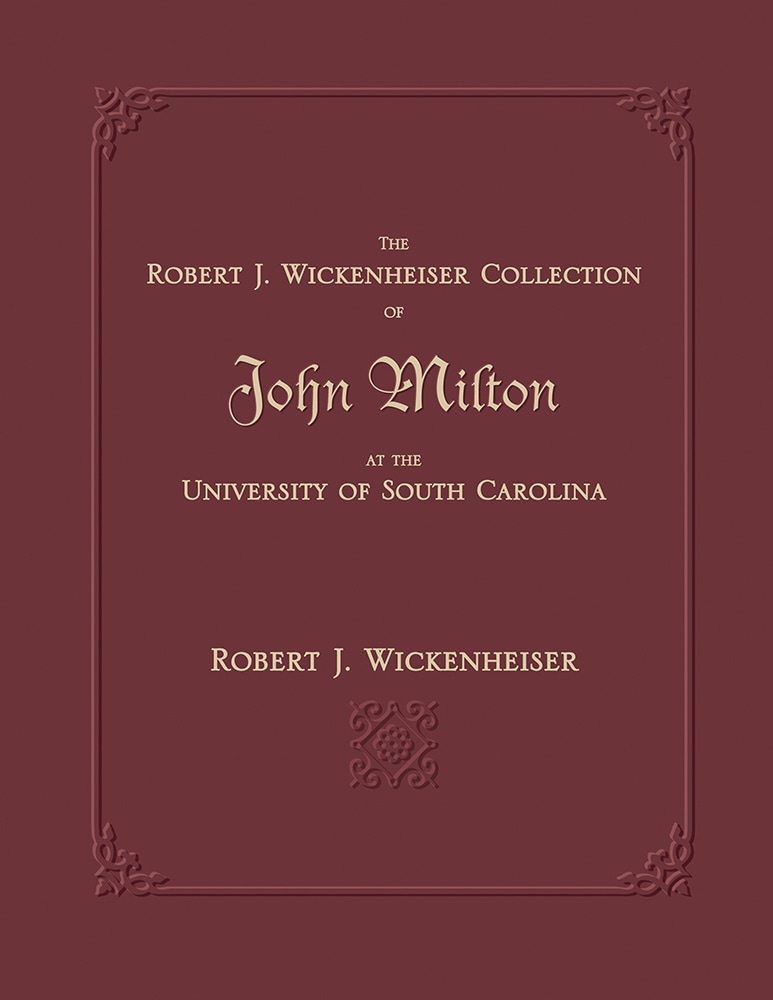 The Robert J. Wickenheiser Collection of John Milton at the University of South Carolina

Robert J. Wickenheiser started his Milton collection as a graduate student at the University of Minnesota in the late 1960s. Later, as a faculty member at Princeton, he began focusing on illustrated Milton, and he established friendships with many of the finest antiquarian book dealers on both sides of the Atlantic. In the years that followed, the Wickenheiser Collection has grown beyond six thousand volumes, including more than sixty seventeenth-century editions of Milton's writings and significant holdings of seventeenth-century Miltoniana. The special focus on illustrated editions makes this arguably the most comprehensive collection of published Milton illustration anywhere—from the first illustrated edition of Paradise Lost (1688) through all the major illustrators that follow, particularly John Martin (1789-1854) and Gustave Doré (1832-1883), and including also original drawings by various other artists, known and unknown. The collection's eighteenth-, nineteenth-, and twentieth-century editions record Milton's continuing impact, while expansive holdings of Milton biography, scholarship, and criticism document the growth of knowledge about the poet's life, writings, and influence.

Beautifully designed and augmented by nearly three hundred color illustrations, this comprehensive descriptive account of the Wickenheiser Collection is being published in 2008 to honor Milton's birth four hundred years ago. The book includes descriptions of nearly twenty-eight hundred editions in the collection, with a large number of the eighteenth- and nineteenth-century editions described for the first time. Detailed listings are provided for all seventeenth- and eighteenth-century Miltoniana as well as select later works. In addition, Wickenheiser provides a section devoted to original drawings, illustrations, engravings, prints, portraits, manuscripts, illuminated texts, ephemera, memorial medals, and other artifacts to show responses to Milton through the centuries.

The Wickenheiser Collection and its corresponding illustrated descriptive account collectively offer Milton scholars and devotees an unparalleled treasure trove of research opportunities into the writings, reception, and lasting literary and cultural influence of this most important of seventeenth-century English-language poets.


Robert J. Wickenheiser earned his M.A. and Ph.D. degrees in English from the University of Minnesota. After teaching Milton at Princeton University for a number of years, he became president of Mount St. Mary's College in Maryland and subsequently of St. Bonaventure University in New York. He is now retired after more than twenty-five years as a university president.

"A sumptuous catalogue of the Wickenheiser Collection at the Thomas Cooper Library of the University of South Carolina . . . superb down to the last detail [with] illustrations which are breathtaking. The book is a milestone in Milton studies, and the Wickenheiser Collection is a treasure trove for archival research."—Albert C. Labriola, acting dean, McAnulty College and Graduate School of Liberal Arts, Duquesne University

""Wickenheiser's is one of the major collections of materials related to John Milton, editions and studies and artworks, in the world indicating the breath and nature of Milton's position in the literary, political, religious, and sociological world over the nearly three and a half centuries since his death."—John T. Shawcross, professor emeritus of English, University of Kentucky

"There is, to the best of my knowledge, no other privately held collection that even remotely begins to approach the Wickenheiser Collection in scope, range, or importance."—G. W. Stuart, Jr., antiquarian book dealer and Milton specialist