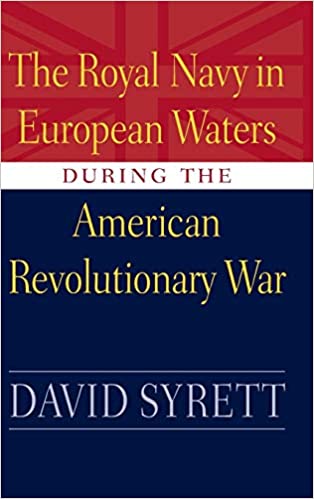 The Royal Navy in European Waters During the American Revolutionary War

A saga of battles, blockades, great fleet cruises, and, above all, failures and lost opportunities

During the American Revolutionary War, Great Britain's Royal Navy faced foes that included, in addition to American forces, the navies of France, Spain, and the Netherlands. In this operational history of a period that proved to be a turning point for one of the world's great naval powers, David Syrett presents a saga of battles, blockades, great fleet cruises, and, above all, failures and lost opportunities. He explains that the British government severely underestimated the Americans' maritime strength and how that error led to devastating consequences. The seemingly invincible navy failed to muster even one decisive victory during the extensive naval conflict.

Noting the complex reasons for British failure in European waters, Syrett lays primary blame at the feet of Britain's political leadership. He describes how Lord North, the first lord of the Treasury and head of government, abdicated control of Britain's military to individual members of the cabinet. Syrett suggests that constant vacillations in policy and strategy, which resulted from power shifts among the cabinet ministers, prevented North's government from formulating a comprehensive wartime strategy or providing the Royal Navy with the strategic guidance to launch a successful campaign.

Syrett concludes that Britain's inability to gain naval superiority in European waters had a profound effect on the outcome of the American Revolutionary War. He demonstrates how the Royal Navy's failure to hunt down and destroy American blockade runners allowed Yankee rebels easy access to European arms and munitions. He also shows that the inability of the British to defeat French and Spanish naval power off the Continent gave Bourbon monarchies the means to aid American naval forces and to conduct naval operations against the British in such areas as the West Indies and the Indian Ocean.


David Syrett is a professor of history at Queens College, City University of New York, and the author of The Commissioned Sea Officers of the Royal Navy; The Defeat of the German U-Boats: The Battle of the Atlantic; The Siege and Capture of Havana, 1762; Shipping and the American War, 1775–1783; The Lost War; and The Royal Navy in American Waters, 1775–1783. He holds B.A. and M.A. degrees from Columbia University and a Ph.D. from the University of London. A fellow of the Royal Historical Society, Syrett was the John F. Morrison Professor of Military History at the U.S. Army Command and General Staff College for the academic year 1981–82.

"It [the book] is well constructed, the language is clear and simple, and the historical narrative flows along, taking the reader with it. In fact, at times I found myself quite enthralled with the development of Professor Syrett's themes and certainly the general reader of the history of the period and of naval history should find the work appealing. The author has succeeded in presenting a complex series of events in a lucid and highly readable way."—Basil Greenhill, author of Steam, Politics and Patronage: The Transformation of the Royal Navy, 1815–54

"No one has written about the naval war after 1778 in European waters, and this work fills a very large gap."—Roger Knight, National Maritime Museum, London