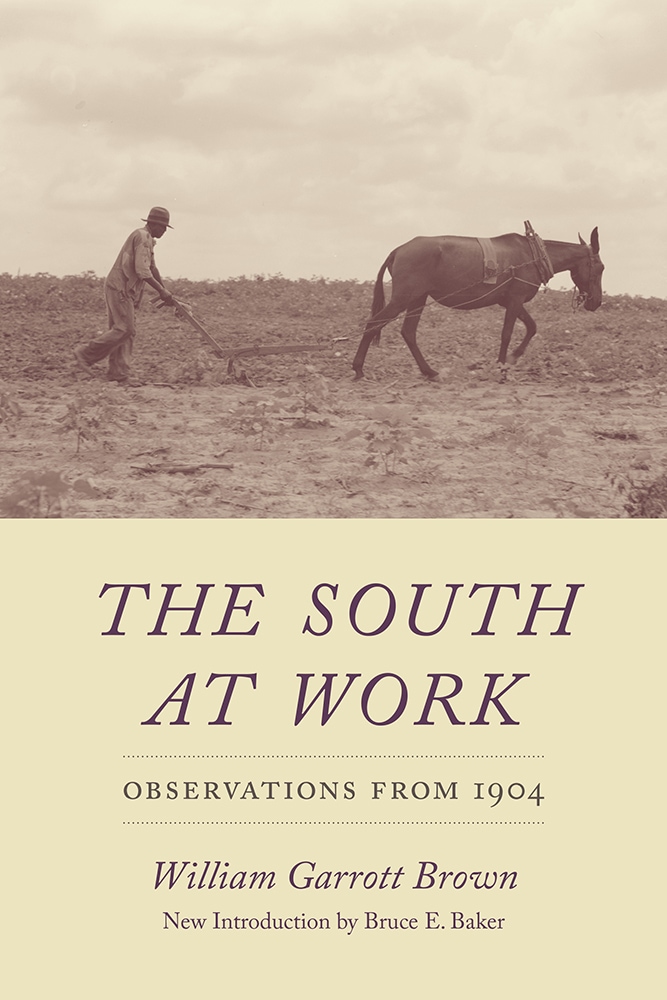 The South at Work

In 1904 William Garrott Brown traveled the American South, investigating the region's political, economic, and social conditions. Using the pen name "Stanton," Brown published twenty epistles in the Boston Evening Transcript detailing his observations. The South at Work is a compilation of these newspaper articles, providing a valuable snapshot of the South as it was simultaneously emerging from post-Civil War economic depression and imposing on African Americans the panoply of Jim Crow laws and customs that sought to exclude them from all but the lowest rungs of Southern society.

A Harvard-educated historian and journalist originally from Alabama, Brown had been commissioned by the Evening Transcript to visit a wide range of locations and to chronicle the region with a greater depth than that of typical travelers' accounts. Some articles featured familiar topics such as a tobacco warehouse in Durham, North Carolina; a textile mill in Columbia, South Carolina; and the vast steel mills at Birmingham. However, Brown also covered atypical enterprises such as citrus farming in Florida, the King Ranch in Texas, and the New Orleans Cotton Exchange. To add perspective, he talked to businessmen and politicians, as well as everyday workers.

In addition to describing the importance of diversifying the South's agricultural economy beyond cotton, Brown addressed race relations and the role of politicians such as James K. Vardaman of Mississippi, the growth of African American communities such as Hayti in Durham, and the role universities played in changing the intellectual climate of the South.

Editor Bruce E. Baker has written an introduction and provided thorough annotations for each of Brown's letters. Baker demonstrates the value of the collection as it touches on racism, moderate progressivism, and accommodation with the political status quo in the South. Baker and Brown's combined work makes The South at Work one of the most detailed and interesting portraits of the region at the beginning of the twentieth century. Publication in book form makes The South at Work conveniently available to students and scholars of modern Southern and American history.


William Garrott Brown (1868–1913) was a historian and essayist during the early years of the twentieth century. A native of Alabama, Brown moved to Massachusetts to study at Harvard University, where he remained until his death. Brown is the author of eight books, including The Lower South in American History.

Bruce E. Baker is a lecturer in modern American history at Newcastle University in the United Kingdom. Baker is the author of What Reconstruction Meant: History and Memory in the American South and This Mob Will Surely Take My Life: Lynchings in the Carolinas, 1871–1947; and editor of After Slavery: Race, Labor, and Citizenship in the Reconstruction South.