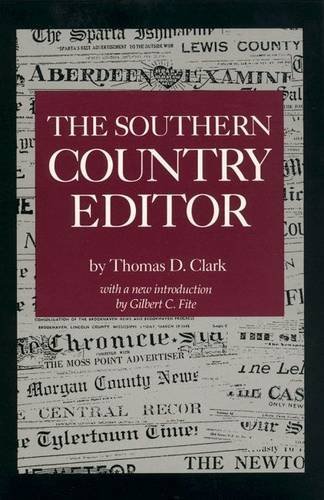 First published in 1948, The Southern Country Editor is a study of the country press from the time of the Civil War to the 1930s. More than a mere account of the country newspaper, it is a picture of eighty years of Southern life and thought.

The country weekly played an enormously important role in shaping rural Southern opinion. Editors assumed responsibility as community spokesmen. The South had special problems with which country editors had to deal that were not common elsewhere: sharecropping, the racial issue, and a predominantly one-party political system. The editorials and news stories reflected attitudes and recorded actions that reveal a great deal about Southern rural society.

By the 1940s, when Clark was researching and writing The Southern Country Editor, the South was undergoing a great economic and social transition. It was rapidly losing its farm and rural character as industrialization and urbanization advanced throughout the region. The Southern Country Editor provides one of the clearest windows through which modern readers can catch a realistic glimpse of the interests, excitements, hopes, and attitudes of Southern farm and small-town people in the days before modernization of the South. In his perceptive examination of the role and influence of the country editor, Thomas D. Clark has made a significant contribution to the institutional history of the South. The bibliography he has provided includes 183 newspapers, published in towns that stretched from North Carolina to Texas.


Thomas D. Clark was born in 1903 and raised on a farm in north Mississippi. He received his early education in a country school. At age 12 he dropped out and worked full-time on his father's farm. By age 22 he had graduated from the University of Mississippi at Oxford, where he worked on the school newspaper. Upon graduation, he enrolled at the University of Kentucky to pursue a master's degree in history, and in 1932, he received his doctorate from Duke University. Clark taught history at the University of Kentucky from 1935 to 1965. He has written several books including Pills, Plows, and Petticoats; History of Kentucky and The Rampaging Frontier and served as consulting editor for the agricultural section of the Encyclopedia of Southern History.