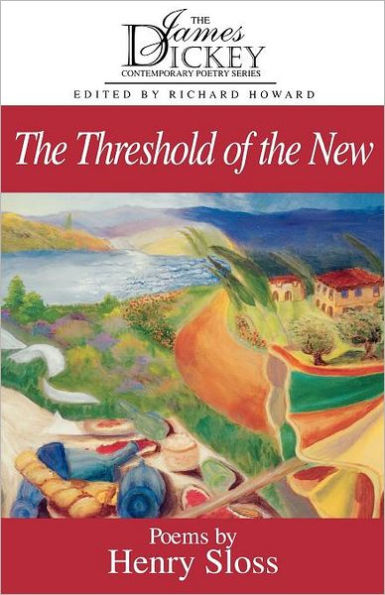 The Threshold of the New

The Threshold of the New, a book twenty-five years in the making, describes Henry Sloss's "exile" to Italy in the early 1970s and his reluctant but increasingly passionate commitment to the terms of life there. The story of an unwilling expatriate, Sloss has lost his job and leaves the United States in the last months of the Vietnam War with his wife and child to live abroad. That he and his family might end up living in Italy only dawns on them with time, as they come to realize their growing attachment to the world they find there and their deteriorating relations with the world they left behind.

The poems depict a long and sometimes agonizing accommodation to the Old World, which is a new world to these travellers who are not on vacation but are foreigners seeking a home away from home. The selections describe the dislocation and alienation, the isolation and introspection compelled by life in a "foreign medium." They also vividly portray the hills and hill towns, the olive terraces and poppies—the extravagant beauty of Umbria.

With time the traveller settles into a new life, a life among other "latter day expatriates." A second child, a small olive farm, the pleasures of food and drink, of company and travel define that life, as does his art. For it is with the art of Italy and with the artists who have worked there that he must finally come to terms, as he must with the artist in himself. The volume's long, final poem, "An Old World Setting," shows the traveller at home in Umbria and in his art.


Henry Sloss was born and grew up in San Francisco. He has lived and worked for much of his life in the mid-Atlantic states, with the exception of his thirteen-year sojourn in Italy. His poems have appeared in the Paris Review, Poetry, and elsewhere.

"The Threshold of the New is an odyssey of pure wonder. Henry Sloss writes of a new beginning in Italy with fresh insights and with depth, 'until a world that would not have occurred / to us becomes both real and heaven sent.' He is engaging, passionate, and delightful."—Grace Schulman