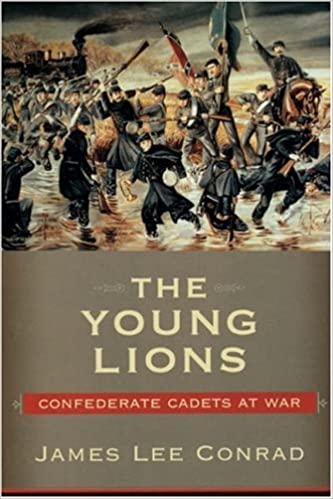 A detailed look at the Confederacy's "boy soldiers"

"In making soldiers of them, " said Confederate president Jefferson Davis regarding the mobilization of his nation's youths, "we are grinding the seed corn." Yet the bloody millstones of war ground them nevertheless, and nowhere more noticeably than at the Confederacy's de facto "West Points."

The legend of the Southern cadets is one of untrained boys wastefully flung in the path of Yankee armies as the Confederacy came to a turbulent end. The reality is one of highly trained young men who rendered valuable service from the earliest days of the war and, when confronted with the enemy on the battlefield, acquitted themselves as well as the veteran troops.

The Young Lions: Confederate Cadets at War is the story of the Southern cadets at four major military colleges during the Civil War—the Georgia Military Institute, the South Carolina Military Academy (Columbia's Arsenal campus and the Citadel in Charleston), the University of Alabama, and the Virginia Military Institute. It is also the story of the Confederate government's lack of a cohesive policy toward military colleges and its failure to adequately support the institutions that fostered its officer corps.

This study is the first thorough examination of the interrelationships and common challenges of the South's major military colleges, giving a detailed history of these Southern institutions. James Lee Conrad discusses the cadets' day-to-day lives as well as the academic and military systems of the schools.

From the opening of the Virginia Military Institute in 1839 through the struggles of all the schools to remain open during the war, the death of Stonewall Jackson, and the Pyrrhic victory of the Battle of New Market to the burning of the University of Alabama, Conrad reveals the everyday heroism of the cadets both on and off the battlefield.


James Lee Conrad is a graduate of the Virginia Military Institute, the Cumberland School of Law at Samford University, and the National Law Center at George Washington University. Conrad has published articles in such journals as Civil War Times Illustrated and America's Civil War. A contributor to the Encyclopedia of the Confederacy, he is the author of Rebel Reefers: The Organization and Midshipmen of the Confederate States Naval Academy. A lieutenant colonel in the U.S. Air Force, Conrad is an attorney with the U.S. Air Force Judge Advocate General's Department. He lives in Dayton, Ohio.

"This is a very useful look at the contributions of Southern cadets to the Confederate war effort and the best account of the experiences of underage soldiers in either army during the Civil War."—Georgia Historical Quarterly

"This is a worthwhile book. James Lee Conrad has skillfully told a lively and poignant tale of a much-neglected topic."—Journal of Southern History

"Conrad's book is rich in detail, with names, facts, and dates telling a comprehensive story of these 'boy soldiers.' I highly recommend this book to all Civil War buffs and to those interested in the South's educational system just before and during the Civil War."—Major Jack Muhlenbeck, U.S. Army Cadet Command, Fort Monroe, Virginia, for Military Review