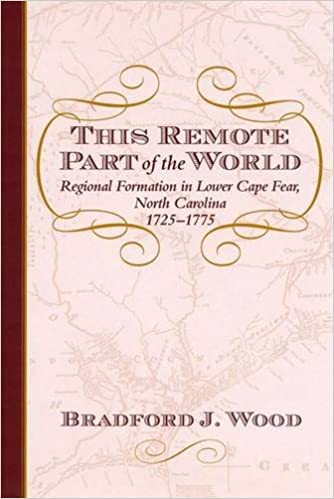 This Remote Part of the World

Between 1700 and 1775 no colony in British America experienced more impressive growth than North Carolina, and no region within the colony developed as rapidly as the Lower Cape Fear. Totally uninhabited by Europeans in 1700, this isolated corner of North Carolina's southern coast is particularly noteworthy for its relatively late colonization and its rapid rise to economic prominence. First settled in 1725, the region grew to be the most prosperous in North Carolina by 1775. In his study of this eighteenth-century settlement, Bradford J. Wood explores frontier development in a region surrounded by more-established communities. Challenging many commonly held beliefs, he presents the Lower Cape Fear as a prime example for understanding North Carolina—and the entirety of colonial America—as a patchwork of regional cultures.

Employing social history tools used in studies of New England and Chesapeake but seldom applied to colonies further south, Wood examines probate, legal, real estate, and tax records to recreate the lives of 5,000 Cape Fear residents during the era 1725 to 1775. Rarely have such methods of intensive archival research, collective biography, and computer-driven sampling been applied to the writing of Carolina history, and Wood's approach makes for a pathbreaking application in a markedly understudied region.

Wood diverges from previous historiography by arguing that the Lower Cape Fear should be considered an entity separate and distinct from the rest of the Carolina coastal plain. While he links North and South Carolinians by family ties, economic enterprise, and cultural aspirations, he underscores the differences between the regions, including the Lower Cape Fear's commercial dependence on forest industries rather than rice culture. Wood ties these findings to broader processes of regional development and to the forces that shaped life for settlers in eighteenth-century America.


Bradford J. Wood is an assistant professor of history at Eastern Kentucky University. He holds degrees from Johns Hopkins University, Michigan State University, and Wake Forest University. Born in Charleston, West Virginia, Wood grew up in southeastern Michigan. His scholarly interests center on the history of plantation societies in colonial British America. Wood's manuscript for This Remote Part of the World won the Hines Prize, awarded by the College of Charleston's Carolina Lowcountry and Atlantic World Program. Wood lives in Richmond, Kentucky.