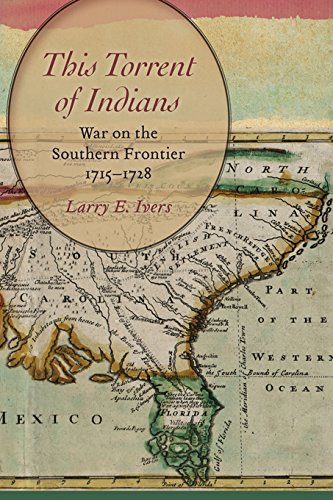 This Torrent of Indians

The southern frontier could be a cruel and unforgiving place during the early eighteenth century. The British colony of South Carolina was in proximity and traded with several Native American groups. The economic and military relationships between the colonialists and natives were always filled with tension but the Good Friday 1715 uprising surprised Carolinians by its swift brutality. Larry E. Ivers examines the ensuing lengthy war in This Torrent of Indians. Named for the Yamasee Indians because they were the first to strike, the war persisted for thirteen years and powerfully influenced colonial American history.

While Ivers examines the reasons offered by recent scholars for the outbreak of the war—indebtedness to Anglo-American traders, fear of enslavement, and pernicious land grabbing—he concentrates on the military history of this long war and its impact on all inhabitants of the region: Spanish and British Europeans, African Americans, and most of all, the numerous Indian groups and their allies. Eventually defeated, the Indian tribes withdrew from South Carolina or made peace treaties that left the region ripe for colonial exploitation. Ivers's detailed narrative and analyses demonstrates the horror and cruelty of a war of survival. The organization, equipment, and tactics used by South Carolinians and Indians were influenced by the differing customs but both sides acted with savage determination to extinguish their foes. Ultimately, it was the individuals behind the tactics that determined the outcomes. Ivers shares stories from both sides of the battlefield—tales of the courageous, faint of heart, inept, and the upstanding. He also includes a detailed account of black and Indian slave soldiers serving with distinction alongside white soldiers in combat. Ivers gives us an original and fresh, ground-level account of that critical period, 1715 to 1728, when the southern frontier was a very dangerous place.

Larry E. Ivers, a retired attorney, served in the U.S. Army as a paratrooper with the 11th Airborne Division, as an instructor in the Army Ranger School, and as an adviser to South Vietnamese troops in the Mekong Delta. His previously published works include Colonial Forts of South Carolina, 1670–1775 and British Drums on the Southern Frontier: The Military Colonization of Georgia, 1733–1749.

"It is likely as fine-grained an account of the actions of the Yamasee War as we are to possess for decades."—H-Net Reviews

"An important addition to the existing literature. . . . Ivers takes the reader immediately into the war."—The Journal of Southern History

"This Torrent of Indians should be required reading for all students of South Carolina history and any scholars who hope to understand eighteenth century America. The Yemassee War was the most consequential Indian war in American colonial history. It determined the future of the American southeast. Larry Ivers has produced a comprehensive and highly readable chronology of this often forgotten episode. This book will be a classic of Southern history."—Lawrence S. Rowland, professor emeritus, University of South Carolina at Beaufort