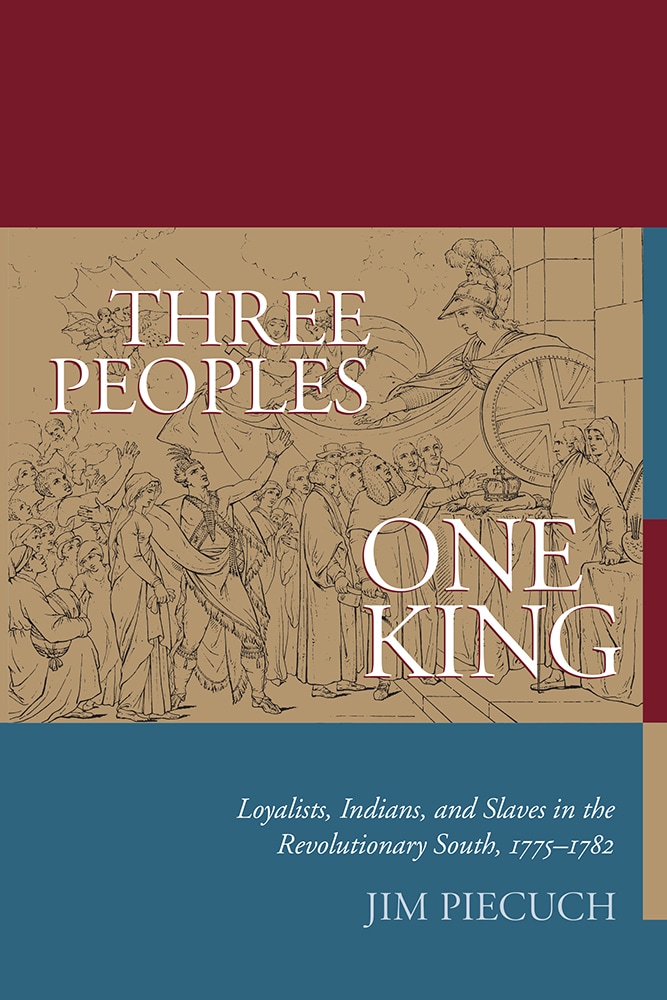 Loyalists, Indians, and Slaves in the Revolutionary South, 1775-1782

Three Peoples, One King explores the contributions and conjoined fates of Loyalists, Indians, and slaves who stood with the British Empire in the Deep South colonies during the American Revolution. Challenging the traditional view that British efforts to regain control of the southern colonies were undermined by a lack of local support, Jim Piecuch demonstrates the breadth of loyal assistance provided by these three groups in South Carolina, Georgia, and East and West Florida. Piecuch attributes the ultimate failure of the Crown's southern campaign to the ruthless program of violent suppression of Loyalist forces carried out by the revolutionaries and Britain's inability to capitalize fully on the support available. In the process of revisiting some cherished opinions respecting the Revolution, Piecuch provides a compelling alternative to long-held notions of heroism and villainy in America's war for independence.

Covering the period from 1775 to 1782, Piecuch systematically surveys the roles of these three groups—Loyalists, Indians, and slaves—across the southernmost colonies to illustrate the investments each had in allying with the British, their interconnected efforts on behalf of their king, and the high price they paid for their loyalty during and after the war. In honing his focus on the Deep South, where British forces struggled to maintain control as their hold on the northern colonies waned and where some of the war's fiercest combat took place, Piecuch offers a sustained interpretation of the war from the British perspective.

Although other studies have assessed the stance of white Loyalist militias and the efforts of revolutionaries to woo them or defeat them, Piecuch's is the first to offer a synthetic approach to all three Loyalist populations—white, black, and Native American—in the South during this era. He subjects each of the groups to intensive investigation, making new discoveries in the histories of escaped or liberated slaves, of still-powerful Indian tribes, and of the bitter legacies of white loyalism. He then employs an integrated approach that advances understanding of Britain's long hold on the South and the hardships experienced by those groups who were in varying degrees abandoned by the Crown in defeat. Aided by thirty-four illustrations and maps, Piecuch's pathbreaking study will appeal to scholars and students of American history as well as Revolutionary War enthusiasts open to hearing an opposing perspective.


Jim Piecuch is an associate professor of history at Kennesaw State University in Georgia, the author of The Battle of Camden: A Documentary History, and the coeditor of General Nathanael Greene and the American Revolution in the South.

"Piecuch's book provides a fresh treatment of the field and helps the reader gain a better understanding of exactly what loyalty meant and how much suffering occurred at the hands of the rebels. Piecuch reinforces the belief that loyalists were devoted British subjects determined to maintain the connection between the colonies and the Crown and work within the system to effect change."—South Carolina Historical Magazine

"The research undergirding this effort is tremendous. Piecuch has been unstinting in his pursuit of manuscript sources, and his study is adequately informed by the latest secondary research. More importantly, Piecuch is among the first to structure a study of loyalism in the revolutionary South that incorporates Indians and African Americans."—William and Mary Quarterly

"Piecuch's book is a much needed and welcomed addition to the history of the American Revolution in the South and of its Loyalist, Indian, and slave participants."—Georgia Historical Quarterly

"Fighting on the losing side has its costs in the pages of history, where the winners control the master narratives. Bucking this tide, Jim Piecuch rescues the lost stories of the Loyalists of the Lower South—white, black, and red—in this richly detailed and closely argued book."—Gary B. Nash, professor emeritus of history, University of California, Los Angeles

"Three Peoples, One King is an outstanding volume that contributes significantly to scholarship on the American Revolution. In this thorough study, Jim Piecuch pays much overdue attention to the 'outsiders'—Loyalists, blacks, and Natives Americans—in the southernmost colonies to further our understanding of the motivations and endeavors of those who cast their lot with the British during the war."—R. Don Higginbotham, Dowd Professor of history, University of North Carolina at Chapel Hill