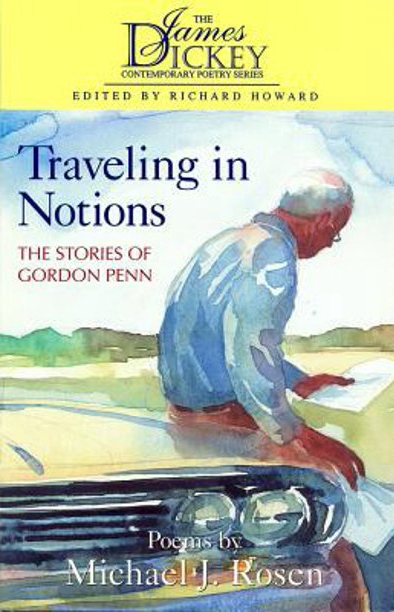 The Stories of Gordon Penn : Poems

In Traveling in Notions Michael J. Rosen creates a novel in poems, a questing contemplation, an alter ego Gordon Penn who holds to hopefulness amid circumstances that will have none of it. Penn is a widower, a soon-to-retire notions salesman, a Midwestern family man whom Rosen describes as akin to characters found in John Cheever's or John Updike's tales or to Italo Calvino's Marcovaldo. Each poem in the collection relates another episode in Penn's ongoing confrontation with contemporary society.

Penn's "notions" are attempts at discovering some homeostasis, some sense of home, or, at least, some hope amid the static of a time-management consultant's radio broadcast, the months' accumulation of charitable letters, and the captivities of zoos, bodies, aging, and loneliness. His unorthodox contemplations extend beyond meditation toward mediation, toward some means by which a person might settle oneself in the unsettled circumstances that he or she can neither welcome nor wage against alone.

Michael J. Rosen's poetry collections include A Drink at the Mirage and Telling Things, and his poems have appeared in such publications as New Republic, Paris Review, New Criterion, Prairie Schooner, and Salmagundi. He resides in Columbus, Ohio, where he has served as literary director of The Thurber House since 1982.

"Gordon Penn joins Weldon Kees's Robinson and William Meredith's Hazard as a highly memorable protagonist in a series of essential poems by an American. Penn chronicles the triumphs and despairs of an everyman—businessman, father, husband, grandfather, senior citizen, and lover. These are poems whose textures mirror the detritus of our days: phone-in talk shows and Velcro, platinum credit cards and remodeled high-rises. Circumscribed and uplifted by mortality, the poems bear testimony to the blessedness of outreach to others."—Robert Phillips

"In an unsentimental depiction of this Traveller in Notions who 'never considered himself an expert / on anything but his few lines,' we have a rare and affectingly humble representation—and celebration—of the poet. With this fine book, Michael Rosen forces us to reexamine our 'notions' of what poetry can and should do. He clearly achieves his hero's desire 'to steal something that he alone might claim / from the wilderness of grown-up things.' Though it seems so very unpretentious, it is an unusual and worthy achievement, as is his ability to make us believe, with Penn, in spite of so much evidence to the contrary, that 'Hope springs—. It just does."—Jacqueline Osherow