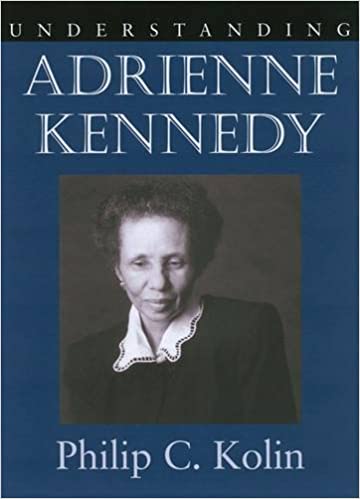 In this critical study of Adrienne Kennedy, Philip C. Kolin explores the interrelationship of life and work of one of the most respected African American playwrights. For more than four decades Kennedy's theater has raised profound issues about race, gender, selfhood, and performativity in American cultural topics that Kolin investigates throughout his reading of Kennedy's career. Making her challenging canon more accessible, Kolin offers in-depth analyses of her plays, political scripts, and experimental autobiography, People Who Led to My Plays, as well as examines her neglected novel, Deadly Triplets, and examples of her short fiction.

Kolin maintains that Kennedy's plays accentuate the highly experimental theater of Off Broadway. He traces the fates of Kennedy's young black and mulatta heroines in their quest for identity and self-worth in a white, prejudiced world, as he discusses her radical departure from traditional, sequential plots and consistent characterization and examines her concern with the harrowing territory of the subconscious—a chaotic world of shifting times, locations, and selves. Kolin argues that Kennedy is justly celebrated for representing her protagonists' fragmentary, conflicting psychological states, reflecting a host of white, black, and mulatta vantages, both historical and imagined.

Recognizing that Kennedy's work departs from that of such African American political activists of the 1960s as Amiri Baraka or Ed Bullins, Kolin demonstrates how her efforts—including Sun and Sleep Deprivation Chamber—challenge colonialist hegemonies of prejudice. He stresses that understanding her plays requires understanding her family and ethnic background, her politics, and even her nightmares. Kolin demonstrates that Kennedy's work runs deep with African rituals, Christian symbolism, classical mythology, the realities of urban violence, and psychoanalysis, all of which have shaped her visionary and provocative canon.


Philip C. Kolin, professor of English at the University of Southern Mississippi, has published books on Edward Albee, David Rabe, Tennessee Williams, and William Shakespeare. He recently edited The Tennessee Williams Encyclopedia, and his Confronting Tennessee Williams's "A Streetcar Named Desire" remains a widely acclaimed cultural and historical guide to the classic play. Kolin is a founding editor of Studies in American Drama, 1945—Present, serves as the general editor of the Routledge Shakespeare Criticism series, and edits Lilies: A Journal of Sacramental Poetry.