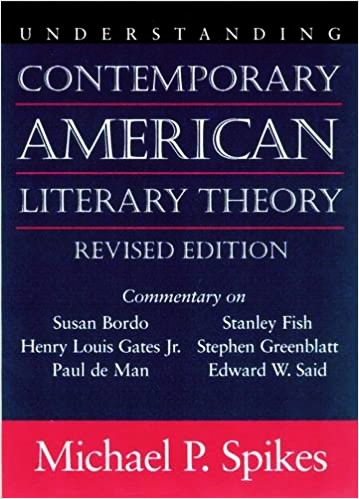 An appraisal of six theorists who have shaped America's literary landscape

In this revised edition of Understanding Contemporary American Literary Theory, Michael P. Spikes adds Stanley Fish and Susan Bordo to the critics whose careers, key texts, and central assumptions he discusses in introducing readers to developments in American literary theory during the past thirty-five years. Underscoring the largely heterogeneous mix of strategies and suppositions that these critics, along with Paul de Man, Henry Louis Gates Jr., Edward W. Said, and Stephen Greenblatt, represent, Spikes offers concise analyses of their principal claims and illustrates how their works reflect a range of critical perspectives, from deconstruction, African American studies, and reader-response theory to political criticism, the new historicism, and feminism.

Spikes prefaces his study with a short history of theory and criticism in the twentieth century and then places each of the theorists within the larger context of contemporary criticism. He explains their specific strategies for interpreting literature, identifies the philosophical assumptions underlying those strategies, cites specific examples of how the strategies are applied to the reading of particular works, and notes possible objections to their theories. With this study Spikes renders the often complex arguments and technical language of contemporary literary theory in accessible terms and gives readers a clear sense of the movements that have dominated the field since the late sixties.


Born in Indianola, Mississippi, Michael P. Spikes is a professor of English at Arkansas State University. He has published critical essays in such journals as Mississippi Quarterly, Philosophy and Literature, and Soundings. Spikes's poetry has appeared in many publications, including Mudfish, Chiron Review, American Tanka, and Writer's Journal. The first edition of Understanding Contemporary American Literary Theory was published in 1997. Spikes lives in State University, Arkansas.

"This book fills the gap between a dictionary of theoretical terms and an introductory monograph on a particular theorist To be clear and concise about a subject that is murky and disparate is difficult, but Spikes succeeds. Moreover, he contributes new ways of looking at central concepts."—Review of Contemporary Fiction

"College-level students of English and literary theory will find this important to understanding the course of modern American literary criticism."—Bookwatch