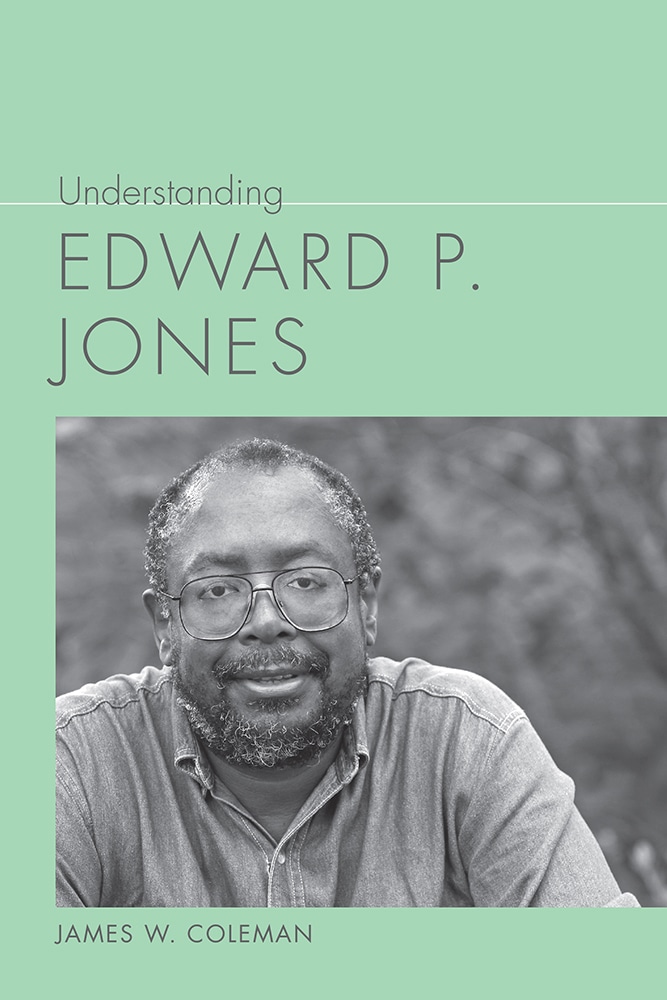 In Understanding Edward P. Jones, James W. Coleman analyzes Jones's award-winning works as well as the significant influences that have shaped his craft. Born and raised in Washington, D.C., Jones has made that city and its African American community the subject of or background for most of his fiction.

Though Jones's first work was published in 1976, his career developed slowly. While he worked for two decades as a proofreader and abstractor, Jones published short fiction in such periodicals as Essence, the New Yorker, and Paris Review. His first collection, Lost in the City, won the PEN/Hemingway Award, and subsequent books, including The Known World and All Aunt Hagar's Children, received similar accolades, including the National Book Critics Circle Award and the Pulitzer Prize for Fiction.

Following an overview of Jones's life, influences, and career, Coleman provides an introduction to the technique of Jones's fiction, which he likens to a tapestry, woven of intricate, varied, and sometimes disparate elements. He then analyzes the formal structure, themes, and characters of The Known World and devotes a chapter each to the short story collections Lost in the City and All Aunt Hagar's Children. His discussion of these volumes focuses on Jones's narrative technique; the themes of family, community, and broader tradition; and the connections through which the stories in each volume collectively create a thematic whole. In his final chapter, Coleman assesses Jones's encompassing outlook that sees African American life in distinct periods but also as a historical whole, simultaneously in the future, the past, and the present.


James W. Coleman is a professor of English at the University of North Carolina at Chapel Hill. He earned his B.A from Virginia Union University and his M.A. and Ph.D. degrees from the University of Chicago. Coleman is the author of Blackness and Modernism: The Literary Career of John Edgar Wideman; Black Male Fiction and the Legacy of Caliban; Faithful Vision: Treatments of the Sacred, Spiritual, and Supernatural in Twentieth-Century African American Fiction; and Writing Blackness: John Edgar Wideman's Art and Experimentation.

"With Understanding Edward P. Jones, James W. Coleman cements his reputation as one of our most incisive and exacting interpreters of African American literature. His critical rigor and crystalline interpretive insights are on full display in a study that fills a scholarly chasm on Jones, an underappreciated artist whose short stories and novel explore our country's most painful and seemingly ineradicable realities—the lesions from America's originating trauma, slavery; urban decay in contemporary Washington, DC; the perilous circumstances of African American children in hardscrabble environments; internecine class tensions in the African American community—in prose that is simultaneously bracing and luminous. Like his subject, Coleman is a stylist of the first order, crafting trenchant, layered arguments in writing that is lucid, graceful, and immensely accessible to scholars, students, and readers beyond the academy. This invaluable and vital study will be the benchmark for all subsequent studies in the still-evolving field of Jones scholarship; a stunning achievement given Coleman's already distinguished critical oeuvre."—Keith Clark, professor, English and African and African American Studies, George Mason University

"A gentle soul with a fierce literary vision, Edward P. Jones is an enigmatic and reclusive writer. In this comprehensive and enlightening study, James W. Coleman provides insight into Jones's narrative works, many of which are interrelated, as well as the man himself. Understanding Edward P Jones will be of great use to readers at all levels who yearn to know more about this great contemporary writer and his complex—yet ultimately rewarding—works of literature."—Rebecka Rutledge Fisher, associate professor, English & Comparative Literature, University of North Carolina at Chapel Hill

"James W. Coleman has established himself as one of the leading authorities—perhaps the leading authority—on contemporary African American male writers. This insightful study of a leading contemporary writer, Edward P. Jones—author of the highly acclaimed The Known World as well as other works—adds to Coleman's prominent reputation."—Fred Hobson, Lineberger Professor in the Humanities, Emeritus, University of North Carolina at Chapel Hill