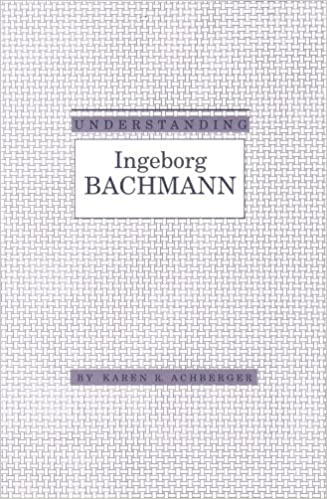 Bachmann and her critique of postwar Europe

Understanding Ingeborg Bachmann introduces the Austrian writer regarded as one of postwar Europe's most innovative modernists to American readers. Karen Achberger surveys Bachmann's highly acclaimed poems, radio plays, opera librettos, short stories, and novels—an entire oeurve dedicated to the struggle against facism—in light of the writer's early life in war-ravaged Austria. Achberger describes the great irony of Bachmann's life and work in that, while she was received as a great writer during her lifetime, the political thrust of her work remained largely unrecognized until after her death in 1973.

Emphasizing the tragedy of the Germanic obsession with Bachmann's personal life rather than with her critique of postwar society, Achberger explores Bachmann's central themes of constant war and of woman's absence from patriarchal society. Comparing Bachmann's influence to that of Virginia Woolf in America, Achberger describes Bachmann's concern with gender-specific issues, which intensified as her career progressed. Achberger contends that beneath these themes lay Bachmann's tireless search for a new language and her utopian belief in writing on the brink of destruction.