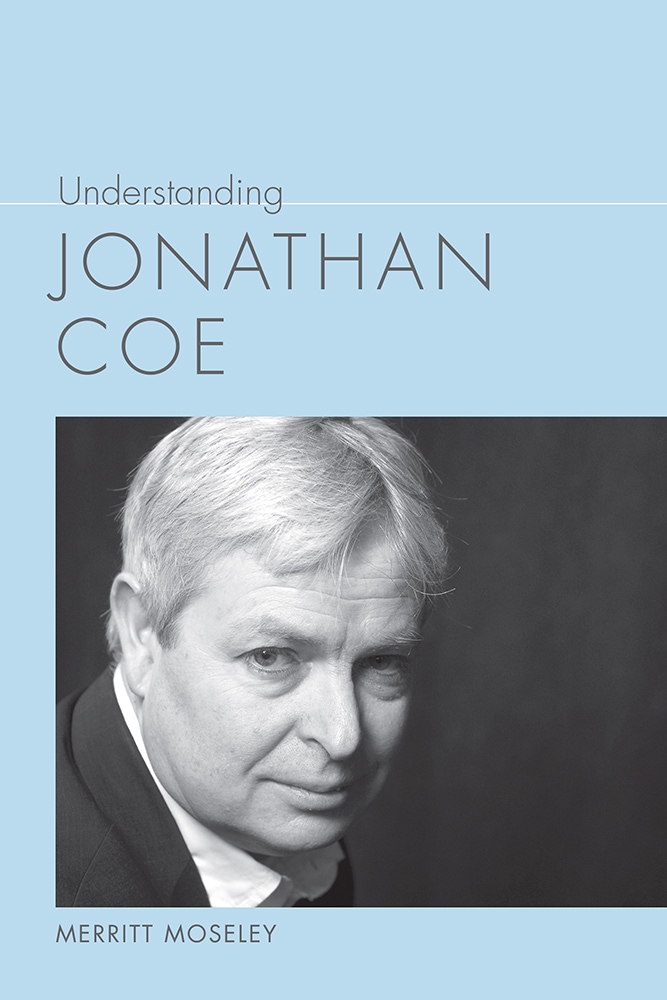 In Understanding Jonathan Coe, the first full-length study of the British novelist, Merritt Moseley surveys a writer whose experimental technique has become increasingly well received and critically admired. Coe is the recipient of the John Llewellyn Rhys Prize, the Prix Medicis, the Priz du Meilleur Livre Entranger, the Bollinger Everyman Wodehouse Prizes for Fiction, and the Samuel Johnson Prize for Nonfiction. His oeuvre includes eleven novels and three biographies—two of famous Hollywood actors Humphrey Bogart and Jimmy Stewart and one of English modernist novelist B. S. Johnson.

Following an introductory overview of Coe's life and career, Moseley examines Coe's complex engagement with popular culture, his experimental technique, his political satire, and his broad-canvased depictions of British society. Though his first three books, An Accidental Woman, A Touch of Love, and The Dwarves of Death, received little notice upon publication, Moseley shows their strengths as literary works and as precursors. In 1994 Coe gained visibility with What a Carve Up!, which has remained his most admired and discussed novel. He has since published a postmodern take on sleep disorders and university students, The House of Sleep; a two-volume roman-fleuve consisting of The Rotters' Club and The Closed Circle; a touching account of a lonely woman's life, The Rain before It Falls; a satiric vision of a misguided life, The Terrible Privacy of Maxwell Sim; and a domestic comedy thriller set at the 1958 world's fair in Brussels, Expo '58. Moseley explicates these works and discusses the recurring features of Coe's fiction: political consciousness, a deep artistic concern with the form of fiction, and comedy.

Merritt Moseley is a professor of literature and chair of the Department of Literature and Language at the University of North Carolina at Asheville. He has published monographs on Kingsley Amis, David Lodge, Julian Barnes, Pat Barker, and Michael Frayn and edited volumes of the Dictionary of Literary Biography including British and Irish Novelists since 1960 and Booker Prize Novels.

"Following his stimulating titles in the same series on Julian Barnes, Kingsley Amis, and Michael Frayn, Merritt Moseley's new study is a comprehensive and reader-friendly overview of Jonathan Coe's major works, themes, and narrative techniques, as well as a helpful guide to the essential criticism on the author's books."—Vanessa Guignery, Ecole Nationale Supérieure de Lyon

"A rich and absorbing book that covers Coe's novels, short stories, and non-fiction, insightfully explores their key themes and techniques, and sets them skilfully in their literary, cultural, and political contexts. It is invaluable both for newcomers to Coe and readers who know his work but want to learn more."—Nicolas Tredell, University of Sussex

"Merritt Moseley's Understanding Jonathan Coe is a clear, well-structured critical introduction to the author's oeuvre, offering a range of detailed readings that both students and general readers will find indispensable in understanding and contextualizing Coe and his writing. This most informative volume makes a vital contribution to literary studies by espousing the work of a writer who deserves far more attention from readers and scholars alike."—Philip Tew, Brunel University London

"Merritt Moseley's Understanding Jonathan Coe is informed, astute, and superbly readable. This portrait of one of Britain's quirkiest postmoderns successfully 'enhance[s] appreciation and enjoyment of the novels' and introduces his biographical writing and literary journalism. In the process of clarifying Coe's political engagement, humor, and metafictional style, Moseley offers a multifaceted, compelling account of an oeuvre that is as formally daring as it is timely."—Ana-Karina Schneider, Lucian Blaga University of Sibiu

"A fascinating study of Coe's work by one of the most admired critics working today. Accessible but authoritative, it provides thought-provoking discussion of the whole oeuvre from the Bogart biography to the experimental later works. The book will be essential reading for anyone wishing to deepen their engagement with this outstanding contemporary writer."—Jago Morrison, Brunel University

"Merritt Moseley has written the ideal introduction to Jonathan Coe. He surveys the full range of Coe's writings with great verve and panache. Acute in its perceptions, adroit in its judgements, and thoroughly engaging and entertaining, this fine, scholarly study offers a lively, authoritative assessment of an important contemporary novelist."—Chris Walsh, University of Chester