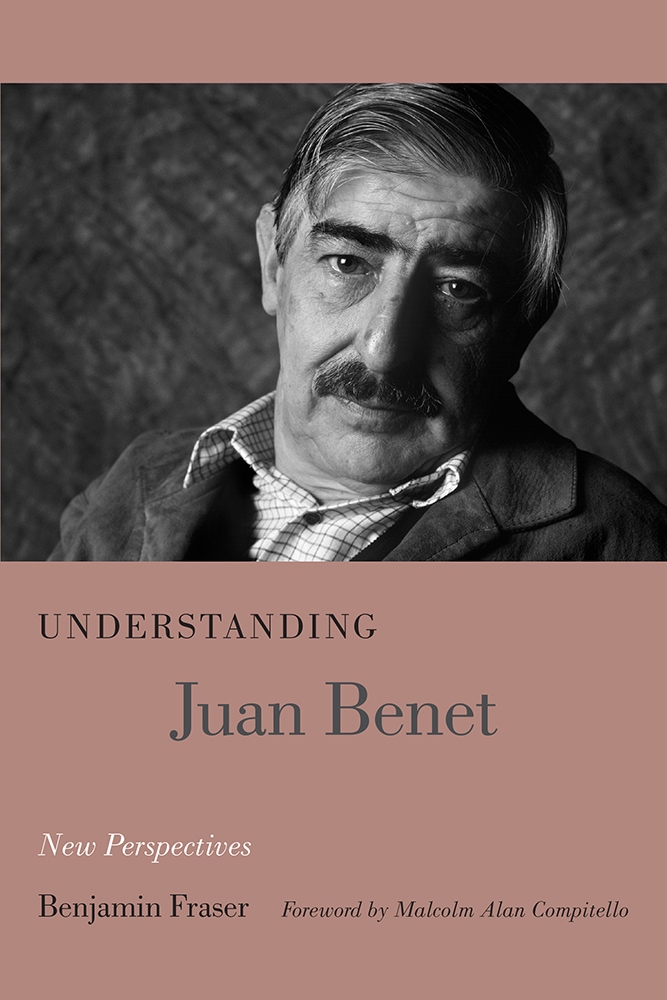 Fraser begins his study by grounding readers of Benet's work in the fundamental importance of understanding the Spanish Civil War. Subsequent chapters offer new perspectives on Benet's literary and essayistic production, first viewing Benet's work through the lens of his profession as a civil engineer and exploring lesser known engineering texts and essays in relation to his creative and literary vision, then mapping the influence of French philosopher Henri Bergson (1859-1941) on the Spanish writer's oeuvre. Fraser also harnesses the development of cultural geography and spatial theory to explore the roles of place and space in Benet's novels—highlighting in particular the elaborate spatial dimensions of Benet's own invented cartography of the novelistic place he called "Región."

Understanding Juan Benet ventures beyond traditional literary study, pursuing the interdisciplinary conversations central to Benet's creative work in which history, fiction, engineering, philosophy, and cultural geography all interact. This introduction to Benet's writing also includes a foreword by Malcolm Alan Compitello, professor of Spanish and head of the Department of Spanish and Portuguese at the University of Arizona, author of Ordering the Evidence: Volverás a Región and Civil War Fiction and coeditor of Critical Approaches to the Writing of Juan Benet.


Benjamin Fraser is an assistant professor in the Department of Hispanic Studies at the College of Charleston. Managing editor of the Arizona Journal of Hispanic Cultural Studies and executive editor of the Journal of Urban Cultural Studies, Fraser is also the author of Henri Lefebvre and the Spanish Urban Experience: Reading the Mobile City and Encounters with Bergson(ism) in Spain.

"Fraser does not simply rehash the observations of scholars; he sets out to offer new, interdisciplinary perspectives that provide insights to Benet's fictional world."—Bulletin of Spanish Studies

"Excellent links are made throughout between Benet's personal circumstances and his literary output, showing a keen understanding of the literary process and a sensitivity to the complexities of writing, highlighting the value that such a holistic approach can bring to literary studies in general and to the writing of Juan Benet in particular."—Anne Walsh, Project Muse

"This is a well-researched volume on Juan Benet's life, professional work, writing and thinking, and the author is to be complimented for his diligence in creating a broader and clearer view of this writer than is otherwise available in other books."—Deekay Daulat, "Bizindia," June 2013.

"Benjamin Fraser moves Benet studies well beyond their current state. He smartly synthesizes how previous scholars have understood Benet's writing, then leaps beyond that understanding. He explores intellectual terrain that others have avoided—primarily Benet's prolific and important work as an engineer—and offers a panoramic view of Benet that stops to linger over key aspects of his writing (time, space, the Spanish Civil War) from new perspectives. Fraser's intelligent critical approach gives breadth and depth to this highly useful and usable study that will help the novice and engage the scholar—an important achievement in academic writing."—David K. Herzberger, professor and chair of Hispanic Studies, University of California, Riverside

"Fraser's book is a superb guide, erudite and insightful, to the dazzlingly complex world of Juan Benet. One of the greatest Spanish novelists, Benet, as Faulkner, created his own memorable world, one that Fraser makes accessible by his very original analysis of Benet's relation with Spanish history, his profession as an engineer, preoccupation with time, and fascination with maps. This is an authoritative and illuminating study of an absolutely masterful writer."—Randolph D. Pope, Commonwealth Professor of Spanish and comparative literature, University of Virginia