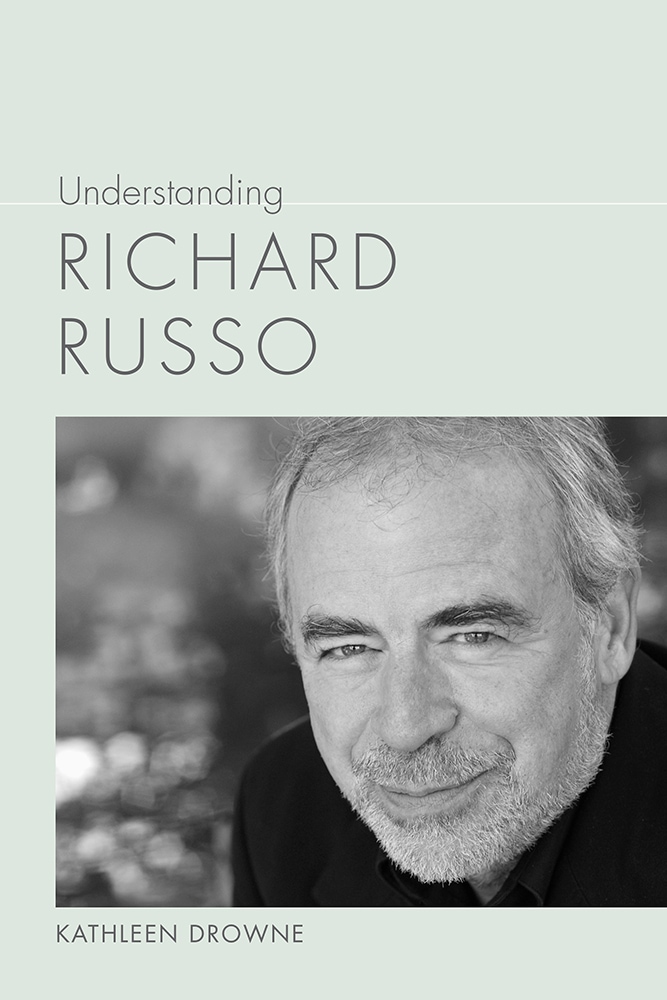 In Understanding Richard Russo Kathleen Drowne explores the significant themes and techniques in Richard Russo's seven novels, one memoir, and two short story collections, including the 2002 Pulitzer Prize-winning novel, Empire Falls. Known for assembling large casts of eccentric characters and developing sweeping multigenerational storylines, Russo brings to life the hard-hit rural manufacturing towns of the Northeast as he explores the bewildering, painful complexities of family relationships. Drowne first recounts Russo's biography, then explores his novels chronologically, and concludes with a chapter dedicated to his shorter fiction and nonfiction. As Drowne invites readers to appreciate more fully this accomplished chronicler of American small towns, she shows how the empathy that Russo creates for his protagonists is amplified by the careful detail with which he realizes their worlds.

In her approaches to Mohawk, The Risk Pool, Nobody's Fool, Empire Falls, and Bridge of Sighs, Drowne traces the primary recurring concern of Russo's work: the plight of deteriorating rural communities and the dramatic impact of that decline on their blue-collar inhabitants and families. Russo's characters have jobs, not careers, and Russo's family relationships are not just nuclear, but multigenerational. Drowne shows that in such a web of powerlessness and attachment Russo explores relationships between emotionally scarred sons and their abusive, absent, or neglectful fathers as well as the frustrated relationships with mothers who yearn for their sons to turn out differently than their fathers.

Drowne also highlights Russo's talent for realistic but highly eccentric characters—worn-out construction workers and odd-jobbers, barflies, has-beens, and ne'er-do-wells—whose lives are emblematic of both the dignity and the desperation of crumbling Rust Belt towns. And out of his melancholic surroundings and struggling characters, Drowne shows how Russo consistently reveals a remarkable, literate humor. Her study offers readers an insightful point of entry into one of America's finest contemporary comic writers, a so-called bard of the working class and a chronicler of small-town America.


Kathleen Drowne is an associate professor of American literature at Missouri University of Science and Technology in Rolla. She is the author or coauthor of several books, including Spirits of Defiance: National Prohibition and Jazz Age Literature, 1920–1930 and The 1920s: American Popular Culture through History.

"By choosing as her subject Richard Russo, an old-fashioned writer who eschews postmodern pyrotechnics, Kathleen Drowne has taken the more difficult road because the virtues of Russo's work are more subtle, but Drowne, an incisive critic, succeeds brilliantly with fresh insights about a writer who is this century's Dickens."—John McNally, author of Vivid and Continuous